The msm is calling the protestors "Pro-Assad".
It is more likely they are awake and aware to the manipulations emanating from the West and are trying to control their own destiny. Who can blame them?

Let's look at the news-

Syrian protesters pelted Robert Ford with eggs and tomatoes on Thursday when he arrived at the US mission's building in the capital, Damascus.
He was meeting one of the Western backed provocateurs Hassan Abdul-Azim.

Hassan has been around since the 1960's. "The old time Nasserite", or so we are told, born in 1932, linked to the Muslim Brotherhood.
Why do I suspect that?

"Three factors made Abdul Azim uniquely qualified to play a leading in any transitional period
-The first is simply that he lives in Syria
-The second espouses a moderate vision of reform
-The third factor has to do with the regime's reluctance to open any lines of communication with organized Islamist groups like the Muslim Brotherhood."

Are you noticing the contradiction?

The supposed "moderate" is going to bridge the gap with the Islamist fundamentalist group the Muslim Brotherhood.
A group that is infiltrated every which way possible by Western intelligence groups.
It's leadership is completely compromised. And it is not secular, at all.
Where as the Assad government is.

Now for a brief digression
Turkey, was going to call off the destabilization campaign if Bashir Assad agree to place Muslim Brotherhood adherents in the government.

"Ankara asked Damascus to offer the Muslim Brotherhood government posts in exchange for Turkey's support in ending rallies in Syria, an offer rejected by Bashar al-Assad, officials and diplomats said.

"Ending the rallies in Syria?"
How could Turkey "end the rallies" unless they were fomenting and supporting them?

Now, how far back was it that I had mentioned Turkish involvement in destabilizing Syria?
Oh yeah, it was back in June. June 8th to be exact!
Flashback! Turkey's role in Syria's destabilisation

"In June, Turkish Prime Minister Recep Tayyip Erdogan offered, if Syrian President Bashar al-Assad ensured between a quarter and a third of ministers in his government were members of the Muslim Brotherhood, to make a commitment to use all his influence to end the rebellion," a Western diplomat told AFP.

"The head of the Syrian state refused such a proposal," said the diplomat, who did not want to be named.

A European diplomat, who also spoke on condition of anonymity, confirmed that such a request had been sent to the Syrian leadership.

"The Turks proposed at first that the Muslim Brotherhood occupy four major ministries and explained that they are part of the political components of this country," the diplomat said"

So much for "democracy" and the people electing their own government?

Let's get back to the Muslim Brotherhood, the alleged moderate and the meeting with Ambassador Ford.
I have covered the infiltration of the Muslim Brotherhood repeatedly in numerous previous posts, so I will not bore the reader with an rehashing. The fact that this man is sitting down to a meeting with Ambassador Robert Ford speaks volumes about who this Hassan Abdul Azim is and what exactly he is up to.

As for Ambassador Ford himself, he has acted very provocatively in Syria. In all likelihood he provided weapons and logistics for the "peaceful" activists.

See the eggs outside of the Damascus office? 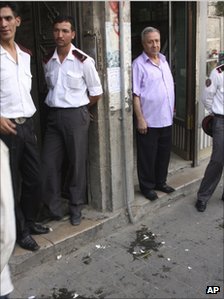 Earlier, Syria accused the US of inciting violence against its military.

Yeah, that has been obvious for a good long while now
Posted by Penny at 12:09 PM