First let me thank Freethinker for bringing this book to my attention. 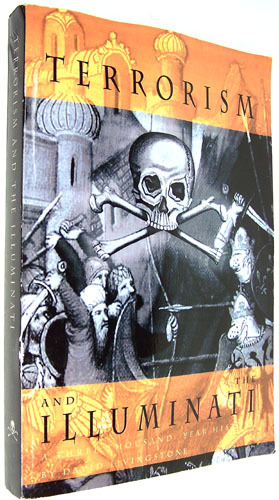 Perhaps you may be interested in getting a copy for themselves? You can.
I haven't read it yet, but, intend too.
I come away with the impression after having read the contents below that this book may just tie a lot of loose ends up. See if this description whets your whistle?
You can get the book at the above link

Contrary to myth being fabricated, Islam does not pose a threat to the West. Rather, Islamic “terrorist” organizations have been created to serve Western imperialistic objectives. These groups are intertwined with Western power through a network of occult secret societies. This relationship dates back to sixth century BC, and the birth of the Kabbalah, in Babylon; a plot to seek world domination through the use of magic and deception.

Herod the Great incepted a series of cooperative dynastic relationships. Their first conspiracy: to corrupt the emerging Christian movement, imposed upon the Roman Empire as Catholicism, with which they would struggle ever since for supremacy over Western civilization.

During the Crusades, these dynastic families associated with their counterparts in the East, members of the heretical Ismaili Muslims of Egypt, known as the Assassins. Templars were believed to have "rescued" a number of these "Eastern Mystics", and brought them to Scotland, being the basis Scottish Rite Freemasonry. The legend also led to the formation of the "Asiatic Brethren", founded by followers of the infamous Jewish false-messiah, Shebbetae Zevi. The Asiatic Brethren then became the successors of the Illuminati, and became involved in the development of Egyptian Rite Freemasonry.

With Napoleon’s conquest of Egypt, Freemasons in his army reconnected with their brethren in Egypt, sparking a relationship that was pivotal to the development of the Occult Revival of the late nineteenth century.

These associations were part of a grand strategy, as outlined by Albert Pike, who originally devised a plot for three world wars, culminating in a third against the Muslim world. However, because the Islamic world had been successfully dismantled, both through the instigations of the West, and by way of their own corruption, they were incapable of mobilizing any kind of threat. It therefore had to be contrived.

This was the agenda of the Oxford Movement, to spread Scottish Rite Freemasonry in the Middle East, headed by Lord Palmerston, Benjamin Disraeli and Edward Bullwer-Lytton, a leading occult figure, as head of the SRIA, or English Rosicrucians, which evolved directly from the Asiatic Brethren.

The agent of this strategy was a notorious impostor by the name of Jamal ud Din al Afghani, who became the founder of what is called the Salafi "reform" movement of Islam. According to K. Paul Johnson, it was Afghani, as head of the occult Hermetic Brotherhood of Luxor, or HB of L, who was responsible for teaching Helena Blavatsky her central doctrines. Helena P. Blavatsky, the famous medium and mystic, was the godmother of the New Age movement, whose books are considered the "bibles" of Freemasonry. Numerous other leading occultists affiliated with the English Rosicrucians and Egyptian Rite Freemasonry travelled to Egypt at the time, and on their return, established branches of the HB of L, out of which emerged the Ordo Templi Orientis (OTO), the most notorious member of which was Aleister Crowley.

The Nazis were the result of a merging of the O.T.O of Crowley and the Thule Gesselschaft of Germany. It is presumably for this reason that Hitler, when he wished to create an arm of German Intelligence in Egypt, contacted a leading Salafi and Freemason, named Hasan al Banna. With the demise of the Nazis following WWII, control of the organization was transferred to the CIA. It was its eventual head, Allen Dulles who spearheaded the move to hire ex-Nazis to train the terrorists.

The Salafi movement has since come to be spearheaded by Saudi Arabia, and identified as one and the same as the heresy of Wahhabism. Wahhabism was created by the British, in the eighteenth century to undermine the Ottoman Empire, and to achieve Western control of the world’s primary oil resource. Today, the promotion of Wahhabism is part of a larger Western agenda, involving the CIA, to denigrate Islam. According to William Engdahl, it was Henry Kissinger who orchestrated the Oil Crisis of 1973. The subsequent wealth achieved by Saudi Arabia then served as a hidden slush fund for CIA covert operations.

When John Loftus, a Justice Department official in the eighties, was permitted to peruse classified government documents, he discovered that the British Secret Service convinced American intelligence that the Arab Nazis of the Muslim Brotherhood would be indispensable as “freedom fighters” in preparation for the next major war, which was anticipated against the Soviet Union.

And so, when the Americans wished to lure the Soviets into their own version of Vietnam, they did so by funding factions of the Muslim Brotherhood in Afghanistan. Financed and coordinated through the assistance of the Pakistani secret service, the ISI, it became the largest CIA covert operation in history.

It was all part of the larger the Iran-Contra Operation. Through the devious activities of the Aspen Institute and the Club of Rome, in collaboration with the Muslim Brotherhood, British agent the Ayatollah Khomeini was installed in Iran. The Americans then began illegally trading arms with the country, proceeds of which were used to fund the right-wing Contra thugs of Nicargua, in return for cocaine which sparked America's crack epidemic. These funds, in addition to growing heroin trade in Afghanistan, were used to fund the US's covert war in Afghanistan.

Through this strategy, not only did the Americans succeed in bankrupting the Soviet Union, but they also managed to create a budding network of Islamic terrorists, brainwashed in the radical ideologies of Wahhabism and Salafism, who dispersed across the world, and who were then blamed as responsible for the great false flag operation known as 9/11, which allowed its hidden planners to embark on their War on Terror, Samuel Huntington's "Clash of Civilizations", or the beginnings of Pike's WWIII.

If you have already read this book tell me about it. Share your thoughts.
Posted by Penny at 12:23 PM