UPDATE BELOW ORIGINATING STORY!!
This story just keeps getting better and better.... with additional updates

This one gets my false flag alarm going! Israeli envoy targeted in India and Georgia?
Keep in mind that India and Georgia have a Mossad sort of a history and background.....
No details on who was behind the attack? How is this "attack" going to be spun?

Spin the "Axis of Evil" Wheel to assign blame!

Israeli officials say their diplomats in India and Georgia have been targeted in apparent bomb attacks.

An explosion hit an embassy car in Delhi, injuring one diplomat. Police said there had been an "incident" but could not confirm an attack.

Israeli officials said there had also been an attempted attack on a diplomat's car in Tbilisi, Georgia, but an explosive device had not gone off.

REALLY CURIOUS- Why was the "diplomats car" parked outside of the Embassy? We are supposed to believe that this is some Hezbollah anniversary and Israel had been on alert, and this so called "diplomat" parks their vehicle on the road OUTSIDE of the protection of the embassy?

IMPORTANT: the vehicle was apparently not parked, but in traffic when the bomb went off.

The embassy is guarded by several layers of security and is in a well-defended area of central Delhi close to Prime Minister Manmohan Singh's official residence.

David Goldfarb, the spokesman for Israel's Delhi embassy, said the diplomat's car was outside the building on Aurangzeb Road when the explosion went off. 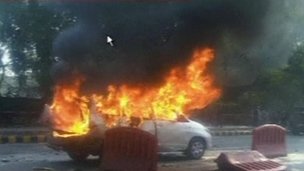 The New Delhi bomb wrecked a vehicle with diplomatic plates and Israel’s parliamentary television channel said the wife of Israel’s Defence attache and her driver were among four people hurt. The Tbilisi bomb was defused safely by Georgian police.

I am curious how it is the Georgian police came to be aware of the alleged bomb?
Who notified them?

As for India.... India is a BRIC nation. India has been non cooperative with the Iran sanctions

Read HERE India opposes more Iran sanctions despite Western pressure.
Is this why the bomb exploded in India and not Georgia?

Also read here, it is being reported today that India and Iran have worked out a deal

Indian and Iranian governments have worked out Rupee trade mechanism for payment of India's total crude imports from the latter in Rupees rather than convertible currency - the US Dollar normally used for such trade globally. The new mechanism is expected to be operational in two months.

And a bomb explodes?

One more thing, If you have been unable to read the above linked article. Just check out this paragraph!

Explaining the mechanism worked out, Anup Pujari said whatever oil India imports from Iran and for that oil whatever money India is supposed to pay, part of that amount will be retained in a bank in India. Thereafter, any Indian who exports to Iran need not have to bother about some US bank. Once (export) documents are negotiated, the designated Indian Bank, where the money will be kept, will pay the exporter the equivalent amount in Indian currency.

Need not bother about some US bank???

"Two Israeli doctors, coincidentally in New Delhi at the time, in coordination with the Foreign Ministry, arrived at the hospital and took charge of her medical care. Defense officials said discussions were taking place about the possibility of evacuating Koren back to Israel."

How fortuitous is that?

The two Israeli doctors just coincidentally happen to be in New Delhi to take charge of this persons medical care?!?!
Have I mentioned previously that I'm not a coincidence theorist?

Can you say False Flag to frame Iran?
Say it with me!
"False flag to frame/ blame Iran"