Or if you actually existed as is being portrayed via the corporate/war selling media.

Yes, we are going briefly back to Marie Colvin.
When I put together the initial post on her, in amongst all that was strange about her, I made mention of the odd pictures of her. Odd in that they seemed off, or out of place, just not right.
This is the first picture I had up 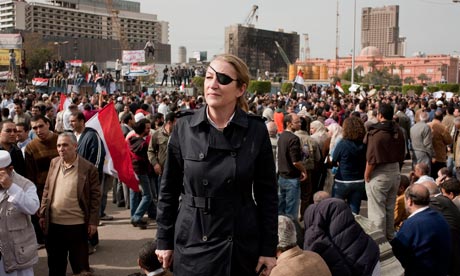 Below is the address for the jpg

It is supposed to be Marie Colvin in Tahrir Square during the recent overthrow of Mubarak?

Curiously.... I stumble across another picture of Marie Colvin in an article here

Below is the address for the jpg

This is Marie Colvin and her second to last husband Juan Carlos Gumucio photographed together and it looks the same as the photo above that is supposed to be from Tahrir Square.

I know your thinking so what? So her husband was in Egypt with her, what’s your issue?
My issue is that according to the linked article her husband died in 2002. Long before any photos could be taken in Tahrir Square.

“Marie Colvin was Gumucio’s fourth wife. He shot himself in the heart at a farmhouse in Conchabamba on February 25, 2002. He was 52.”

Notice it does not mention his wife, Marie Colvin?
What the obituary does mention is this...

“No one witnessed his death in the farmhouse he had rented outside Cochabamba. But those who knew him best, and knew his demons, are sure it was not premeditated. He would never deliberately have taken himself away from his daughter. “

Did he really take his own life? Or did someone take it for him?
And what about the photos. One with the deceased husband and one without.
Clearly they are the same photos.
Same quilted jacket showing to the right of the Colvin figure.
Same red flag behind the husband figure.
Posted by Penny at 12:36 PM