You ever have one of those days, where there is so much to do you simply don’t know where to begin with it all? This post is like that. It has to be since the situation in Syria is so complex.
This post covers a lot of ground as painlessly as possible, hopefully?

The easiest route to take may be just to pick up where we left off, after backtracking ever so briefly. Let's hit the trail!

Last Wednesday journalist extraordinare and super heroine Marie Colvin was “killed” in Syria.
The msm was spinning fast and furious on the heroics of this swashbuckling gal.

This timely incident coincided very nicely with the “Friends” of Syria meeting held just two days after, on Friday, in Tunisia.

Notice I used coincided?
Which is related to coincidence?
If you have read here for any length of time you know I do not ascribe to coincidence theories.
Au contraire it makes sense that the “killing” of Marie Colvin was purposely undertaken to provide a sense of urgency to the “Friends” meeting.
Marie Colvin’s last report was one of “babies being killed”. Marie herself falls on the sword just as another coincidentally timed report hits the media on the Syrian regime “targeting” journalists.The western audience is fully primed, psyched or pumped with ample tales of bad Syria. Along come the “Friends”. As you know, friends just want to help? Unless their two faced back stabbers?
That is something else entirely, but backstabbers,best describe the “Friends” of Syria.
The say all the right things....
Let me quote Hillary Clinton. 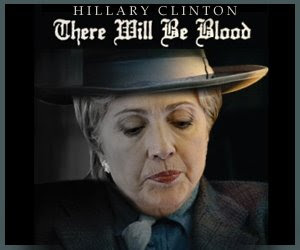 With Hillary there will always be blood

“The longer you support the regime’s campaign of violence against your brothers and sisters, the more it will stain your honor. If you refuse, however, to prop up the regime or take part in attacks on your fellow citizens, your countrymen and women will hail you as heroes”

She says all the right words. But, she is not talking to Syrians. Her words are for western consumption. Her words are for the ignorant masses of North America and Europe. The blithering idiots who eat this shit up as if it is nutritious and delicious. The Syrians, the vast majority of them know this woman does not have their best interests at heart. Their not fooled by the words that cross her lying lips.

If you are of a sensible nature you would be aware that Assad still has the support of the vast majority of persons in Syria. Sure, they know he is not perfect, but, thanks to the West he is looking better then the alternative. All the Syrians need to do is look at what western intervention has accomplished for Iraq, Afghanistan, Libya and Egypt, to know, that is not the future they want.

Can you blame them?

Now let’s continue on our journey...Edith Bouvier- Recall her from this post?
She of the broken femur, wanting to be evacuated from a war torn zone because she desperately needed an operation??? That Edith Bouvier?
She had the opportunity to be evacuated from her “nightmare” and she said NO!
That’s right. Edith Bouvier, the largest bone in her body - broken. In need of surgery.
chose to stay in Homs.
The sister organizations of the Syrian Red Crescent in conjunction with the International Red Cross ,went to Homs and delivered aid.

While present an offer to evacuate Ms Bouvier and company was made and they REFUSED TO BE EVACUATED. (Thanks freethinker!)

Wounded journalists stranded in Homs refused to be evacuated by a Red Crescent team on Friday, the International Committee of the Red Cross has confirmed.

The team rescued 27 injured people from the city last Friday after negotiations with the governor of Homs. But wounded journalists including Le Figaro reporter Edith Bouvier and Sunday Times photographer Paul Conroy declined to enter the Red Crescent vehicles.

"The journalist refused to be evacuated by the Syrian Arab Red Crescent last Friday," a ICRC spokesman told the Guardian.

He suggested renewed attempts to reach journalists and other wounded people would be made today.

Bouvier's story was non-believable from the get go and is totally discredited after this. Her injury was a ruse. Her agenda is nefarious.

As has been mentioned before there has long been opposition in Syria, resident Syrians, who do not want NATO intervention and want to work to improve Syria without blowing it all to hell first. Then there is the other opposition. Formed under the umbrella of NATO, largely resident in the US and Europe. This is the opposition that has split, yet again. And, just after being recognized by the “Friends” in Tunisia

The fragile unity of Syria's opposition umbrella group, the Syrian National Council, has been put to the test by some of its most senior members, who have announced the formation a new opposition body.

The Syrian Patriotic Group, which will be led by at least 20 members of the 270-person SNC, promised to "back the national effort to bring down the regime with all available resistance means including supporting the Free Syrian Army", in a statement sent to Reuters on Sunday.

In announcing the split, the new group dealt a blow to the SNC, which just days earlier was recognised as a "legitimate representative" of the opposition at the Friends of Syria meeting in Tunisia.

How about that referendum in Syria? A turn out that no western nation could even dream of especially under trying circumstances!
How does the West greet this Syrian referendum. In the country of Syria. Voted on by Syrians.
With complete disdain, the UN Says it is “meaningless”

As opposed to all those “meaningful” western backed elections? Such as the bogus one in Haiti, where the political party of the people was not allowed to run a candidate. Or the latest scam in Yemen? How about Iraq? Where voter turn out is non-existent. Or there is only on person on the ballot?

Let’s check out the Syrian referendum together. Almost 90 percent of voters says YES.
And the voter turn out? 57.4 percent of the voting populace.
To give you a sense of how major that is considering what is going on in Syria at this time
Voter turnout in Canada's last election, no western destabilization happening, just 61 percent.
Up from 2008 when the turn out was just 58 percent
In the US voter turn out for the last Presidential election stood at under 57 percent.
How is it that these are meaningful choices but Syria’s isn’t?
The UN rather then being impartial or uniting nations is disdainful of most Syrians.
Showing itself to be a tool of the Western Imperialist and Israeli agenda.

How about some old information but very relevant still.
Stratfor Challenges Narratives on Syria- here and here

But we are now entering the tenth month of this particular violent revolt – even Libya with its full-fledged civil war didn’t take so long. So what gives?

According to the Texas-based geopolitical risk analysis group Stratfor which released an eyebrow-raising piece on Syrian opposition propaganda efforts last week, “most of the opposition’s more serious claims have turned out to be grossly exaggerated or simply untrue, thereby revealing more about the opposition’s weaknesses than the level of instability inside the Syrian regime.”

The oppositions claims grossly exaggerated or out and out lies? Not surprising.

There is more, so please read at the above links. Stratfor seems to have removed that page...
And I can’t find it in the cache? Hmmm?

Getting back to the occupied Golan Heights.

The Arabs and Druze under occupation support the Assad regime
One comment really says it like it is for the Arabs in Israel. Oozing with venom.
You can read it below the video, link here


While in Israel and the Golan Heights... this is worth a mention.
I recall this moron from way back. The Saudi Cleric who very conveniently plays into the Israeli victimhood/ Arabs bad agenda. The agenda that always benefits that one little country in the middle east, of course Israel. Of course he is a Saudi.
This guy is all about getting Bashar Assad. Maybe Israel should give him an award or something? 'Murdering Assad more important than killing an Israeli'

Saudi newspaper Sabah quoted al-Qarni as saying that Assad deserves to die for heresy, referring to him as "Basharon," in a jab alluding to former Israeli Prime Minister Ariel Sharon. The Muslim cleric claimed that the Golan Heights will not be freed until Assad's "treacherous" regime falls.