You may or may not be aware that wrangling regarding a new Syrian resolution at the UN is ongoing at this time.
The West is insisting Assad step down.
I find this demand so surreal.

How is it that the West can simply demand a leader of a sovereign nation step down?
As of today it seems Russia is going to veto this latest move by the West at the UN.
It appears China is on board with the veto. 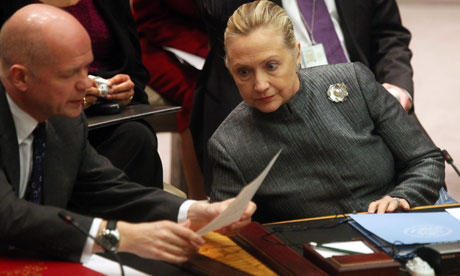 (Hilary is looking very military, dare I say fascist)
William Hague and US Secretary of State Hillary Clinton at a United Nations Security Council meeting on the crisis in Syria (Guardian)

“Russia signaled on Wednesday it would veto a draft UN resolution calling for a political transition in Damascus unless it explicitly ruled out military intervention.”

A day of diplomatic discussion on Syria at the UN Security Council ended without agreement as Russia and China remained opposed to move for a regime change in Damascus.
Moscow’s envoy to the European Union, Vladimir Chizhov, said on Wednesday there was no chance the text could be accepted unless it precisely rejected armed intervention.

The draft “is missing the most important thing: a clear clause ruling out the possibility that the resolution could be used to justify military intervention in Syrian affairs from outside. For this reason I see no chance this draft could be adopted,” Mr Chizhov said.

“"Nothing in this resolution compels states to resort to the use of force or the threat of force," says the draft, obtained yesterday.”

Now I will laugh at the absurdity of this "language"Double speak!
If you or I can read simple words and understand the absurdity in this surely the Russian and Chinese delegates comprehend them also.

There is nothing specific in the resolution that PREVENTS the use of force or the threat of force.

Or as the last sentence from the FT acknowledges...

Some western officials believe that a Russian veto could shift the debate onto finding other ways to directly assist the Syrian opposition.

Since the West along with the Arab nations have already been indirectly assisting.....


"The Arab League is now in the driver's seat; sometimes you can press the accelerator too hard and you find yourself in a ditch," Russia's ambassador to the UN, Vitaly Churkin, said yesterday. "The Security Council cannot prescribe ready recipes for the outcome of domestic political processes."

The vote at the UN will be taken this Friday. Will Russia and China change their minds in this short time? We will wait and see.

According to the Israeli media outlets of Haaretz and Ynet
(These seem to be the only two news outlets carrying this "news"
The "Free Syria Army" is claiming to control half of the country of Syria.
This is in my opinion a false claim.
What the exact purpose of making this claim is, I don't know?
Posted by Penny at 9:42 AM