Syria, Saudi Arabia and what the hell is happening here!?

"What the hell is happening here" I am trying to make sense of this all.

“Saudi Arabia's King Abdullah has ordered that his chief of general intelligence be replaced by a former ambassador to the United States, the official Saudi Press Agency reported Thursday.

Abdullah's move came with his issuance of a royal order relieving Prince Muqrin bin Abdulaziz of his post and appointing him instead as a ministerial-level adviser and special envoy to the king.

Bandar bin Sultan sometimes known as Bandar Bush. Some may recall him from the time frame of 9/11 and the attack on Iraq.

Bandar and Bush
Earlier today I had seen a story from Haaretz about Bandar. I went back to get it, but there was only a 404 error page. (Slozo et al: here is the link to that 404- "Resource not found")
What is a blogger to do? Of course get the cached page!

Saudi Arabia’s Prince Bandar bin Sultan, 62, fell in love with the United States when he was still a pilot in his country’s air force and took aerobatics training on an American air base. The romance was renewed several years later when he was named his country’s ambassador to Washington, a tenure that lasted 22 years, during which he was a regular guest of both George Bushes and was the only ambassador who was guarded by the U.S. Secret Service.

Last week King Abdullah named him director-general of the Saudi Intelligence Agency, replacing Muqrin bin Abdulaziz, on top of his post as secretary general of the National Security Council, which he’s held since 2005.

Bandar’s appointment to the most important position in the Saudi security echelons is no coincidence. Aside from the fact that he is very well connected to the kingdom’s leaders (his wife, Haifa, is the daughter of King Faisal who was assassinated in 1975, her brother, Turki al-Faisal, was once head of Saudi intelligence and another brother, Mohammed al-Faisal, is one of the kingdom’s richest men), it seems that the primary reason for his appointment now is that Saudi Arabia is preparing for the next stage in Syria, after President Bashar Assad finally gets off the political stage, one way or another, and Syria turns into a focus of international struggles for control of the inheritance.

There is already an intense campaign over this inheritance between the United States with the European Union and Russia, but the ramifications of Assad’s fall on the positions of Iran and Hezbollah – and no less so, Iraq – are more important. And when Egypt is hobbling on crutches in its effort to establish its “Second Republic,” and its position in the Middle East is that of a disabled person needing nursing care, and when the Arab League is paralyzed, Saudi Arabia is left to assume responsibility for drawing up the new map of the Middle East.

From Washington’s perspective, Bandar’s appointment is important news. Bandar, the rugby fan and man-about-town, whose wife, more than a decade ago, was being investigated by Congress about her connections to Al-Qaida activists, is considered the CIA’s man in Riyadh.

The CIA's man in Riyadh. This means it is the US drawing up the new map for the middle east.

He’s known as a can-do person who makes quick decisions and doesn’t spare any resources to achieve his objectives.
When there was a need to transfer money to the rebels in Nicaragua in the 1980s, Bandar was the one who dealt with the Saudi “grants” that were requested by the White House. He was also the one who arranged things when Saudi Arabia was asked to help fund the mujahedeen’s battles in Afghanistan against the Soviet conquest.
Bandar is a member of that part of the royal family that is against the revolutions in the Arab states, and who see the rise of the Muslim Brotherhood no less of a threat than Iranian influence in the region.

He helped King Abdullah (when the latter was still crown prince) to formulate the Saudi peace plan that later became known as the Arab Peace Initiative to resolve the Israel-Palestinian conflict, and he fashioned the tough Saudi stance against Syria and Hezbollah after the assassination of Lebanese Prime Minister Rafik Hariri in 2005. A few years afterward, he suggested that the king change course and reconcile with Syria in an effort to cool the relations between Syria and Iran.

When the revolutions broke out, even more so when the Shi’ite rebellion began in Bahrain, Bandar supported sending troops to that small kingdom to quell the revolt, which Saudi Arabia perceived as Iranian intervention in the business of the Gulf states. At the same time, Saudi Arabia decided to quickly support the new Egyptian regime financially, depositing more than $3 billion as a guarantee in the Egyptian central bank.
Egyptian President Mohamed Morsi knows very well that this aid does not stem from Saudi Arabia’s great love for the Egyptian revolution, let alone for the Muslim Brotherhood, but is meant to block Iranian efforts to gain a foothold in Egypt. As a result, when Morsi was invited to Tehran for a conference of non-aligned nations, he decided to stop first in Riyadh for a visit, so as not to give Iran the political satisfaction of being the first host of the new Egyptian president.

Saudi commentators say that Bandar was the one behind the decision to give money to the Syrian rebels, and even to buy weapons for them, and that the tough Saudi demand that Assad must step down is part of Bandar’s own strategic concept, which guides the kingdom far more than the positions of the 88-year-old king, whose health is failing.

The Saudi policy on Syria is being closely coordinated with the U.S. administration, both of which (like Israel) want to separate Iran from its most important Arab base and undermine the flow of weapons to Hezbollah. These goals have not escaped Iranian eyes, which is why Tehran is strengthening its positions in Iraq and in the Kurdish zone of northern Iraq. Moreover, according to reports from the Syrian opposition, Iran is also making clandestine contacts in Europe with rebel representatives.
There is no way to know what Syria will look like after Assad, and in which of the rebelling factions it pays to invest. Saudi Arabia, as is its wont, is investing in all of them. It is hoped that the United States will get the payoff.

I should have just underlined the entire article, there is an abundance of interesting information.

Considering Bandar Bush is the CIA’s favourite Saudi.... should this news come as any surprise?

Members of the Syrian Free Army have announced the arrest of Husam Taher Husam , a self proclaimed former Syrian intelligence operative, who testified in the investigation of the 2005 assassination of former Prime Minister Rafik Hariri.

The man identified himself as Husam and that he was witness in “the assassination of president martyr Rafik Hariri.”

“I have information, just get me to Beirut and i will give you surprises that you have never dreamed of,” the man told his captors.

Is this man going to implicate Syria in the assassination of Rafik Hariri?
You may recall that the UN tribunal initially attempted to frame Syria for that “suicide bombing” the hallmark of the NATO goon squads....

But, wait. Is there something else going on with Saudi Arabia? NYS points this out-


Islam Times - A blast has hit the builing of Saudi intelligence service in Riyadh, killing deputy of the newly-appointed intelligence chief Prince Bandar bin Sultan, according to reports.

Saudi media have so far refrained from showing any reaction to the blast.

Saudi Arabia has called for an extraordinary summit of Muslim leaders to be held next month to address risks of 'sedition' threatening Muslim countries, state news agency SPA reported on Sunday.
Saudi King Abdullah has called for 'an extraordinary Islamic solidarity meeting to ensure unity during this delicate time as the Muslim world faces dangers of fragmentation and sedition,' SPA quoted Foreign Minister Saud Al-Faisal as saying.

Why am I having 9/11 flashbacks?? Why am I thinking about the whole WMD's in Iraq scare tactics?
Is it because it is playing out all over the media, yet again?
LVB clearly picked up that same vibe and put together a great post Where's Waldo? And his WMDs - Again??? 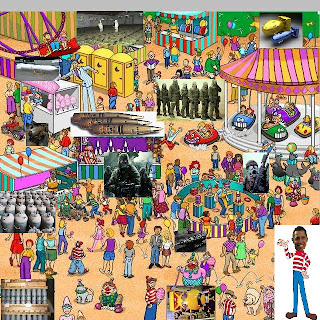 With Obomba as Waldo!