Finally. Clinton going to Turkey Quick comment then the highlights

It would seem things are not going as swimmingly in the destabilization of Syria as the US/NATO/GCC had hoped. Could it be that the Syrian people are totally on the ball and are preventing the ruin of their country?

As Tozz tells us: "the Syrian Army hand by hand with the United Of Aleppo's Clans are doing good job in the areas near the Citadel. Thanks God there's no damages and they don't want to make destroy especially there."

The Syrians don't want their home and country destroyed and the soldiers are their respective and collective families. The soldiers are their brothers, their cousins, their uncles, their nephews and their grandchildren.
Why would they assist in getting them killed?
Another factor is the US election. as you will read.

“The Obama administration is unlikely to broaden military engagement in Syria at least until after the U.S. presidential election, despite rebel military gains, pleas for help from the rebels and criticism at home.

“Officials agree that the gradual expansion of U.S. support for the Syrian rebels will stop well short of any armed intervention or aerial protection zone for now

Clinton is looking for a “clear picture of the effectiveness of what we are currently providing and how it can be made more effective, and then whether or not there are additional things we can do,” the official said.
John O. Brennan, the White House’s top counterterrorism official, said Wednesday that President Obama has not ruled out any options for helping the Syrian rebels, although he noted that they (the rebels)  already are “awash in weaponry.”

Armed with some tanks and heavy weapons supplied by Persian Gulf states or captured from the Assad army, the rebels have made significant gains, although not enough to shift the military balance of the 17-month conflict”

The generic brand “rebels” are likely not meeting the expectations of the US, despite the obvious fact they are “awash in weaponry”. 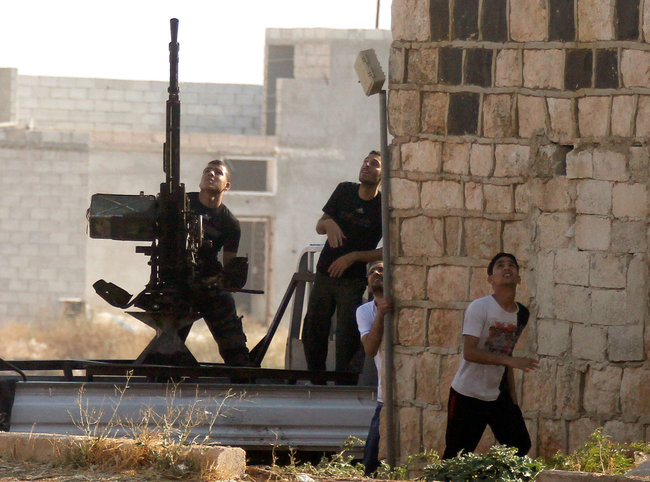 A Free Syrian Army fighter fired an antiaircraft gun during an airstrike in the village of Tel Rafat, north of Aleppo, on Thursday.
Brief digression from the NYT"s


“We’re moving from inside buildings, making holes in the walls of houses so we can run from the snipers,” he said.

Hello!? If the rebels are inside buildings, first question that comes to mind is,were they invited?

RE: the upcoming US election-

The upcoming U.S. presidential election in November casts the national security decision-making on Syria in a political light.

They are neither postponing nor hastening any policy change because of the election, but officials agree that unless Assad falls quickly, the United States is highly unlikely to significantly alter its current course before then.

“I just don’t see it coming that fast, with or without the election,” one senior U.S. official said earlier this week. The official, like others, agreed that the election does complicate the already difficult effort to understand the changing situation in Syria and react to it.

“American public opinion has solidly favored winding down the Afghan war and the war in Iraq before it, and the public mostly sides against any new military intervention in Syria.”

The citizens of the US don’t want another war. Not an overt, in your face war. That said, one would have to be resident on the moon, or in a deep state of denial,  to not realize the US is deeply involved in the destruction of a stable nation state.

Another UN ringleader is on the way

“ Significant expansion of the U.S. role is unlikely in the short term, and there is little appetite in Turkey for a strong military response, despite worry over the consequences of a prolonged civil war at its doorstep.”


Would this  explain why Iran called the hasty meeting yesterday? Is there going to be an attempt at this time to take advantage of the generic brand “rebel” failures. Might this also be why Saudi Arabia offered to meet with Iran?
What to make of this, left by anonymous? Is Saudi Arabia on the edge? One the edge of what, exactly?

“By appointing Prince Bandar bin Sultan as its new intelligence chief, Saudi Arabia has installed what looks like a war cabinet at a time of rising tensions with Iran and growing internal dissent from its Shiite minority.

The Saudis have also heightened their alert level in other ways to prepare for possible regional conflict.


Much about Bandar's dirty dealings including this-

“Bandar would be a useful intermediary, for example, if Saudi Arabia sought nuclear weapons or ballistic missile technology from China to defend against such threats from Iran.”


Wait a minute there? Aren’t we supposed to believe that Iran needs to be taken down because of nuclear weapons?

Re: the Shiite uprisings in SA- note the language

The Saudis haven’t been able to stop the insurgency  (insurgency? How come in Syria it is a push for freedom?) in Al-Qatif; indeed, it appears to be worsening. The protesters may hope to provoke the Saudis into a bloody crackdown,(provoke the Saudis?) which would leave scores dead and encourage much wider demonstrations and international outcry.

Saudi reformers argue that the best way to quell Shiite protests is to give them the full economic and political rights of citizenship.

As always lots to mull .

Puhleez! . Go to the link for the usual Baird posturing. Baird bad posturing?
Posted by Penny at 6:39 PM