Tying up some lose ends here-

Canada closing the Iranian Embassy and suspending all diplomatic ties with Iran-
Covered in this post Worrisome scenarios....
The topic was narrative creation and who was truly being troublesome
Stumbled across this after putting that post up- Why did Canada suddenly suspend relations with Iran

“Suggestions in some foreign media that Canada bailed out of Tehran because Iranian security suspected our mission there had been collecting intelligence for the U.S., Britain and perhaps Israel — and that we were on the verge of expulsion, or even worse.”


Now there is an interesting line of thinking! One that has to be seriously considered along with this news, immediately following the Canadian action. The IAEA receives ‘significant intelligence”

“ The UN atomic agency has received new and significant intelligence”
“The diplomats say the information comes from Israel, the United States and at least two other Western countries “


Could this intelligence have come from Canada?  Was Canada in cahoots with the US, Israel and likely Britain? Was Iran getting wise to Canada’s interference?

Keep in mind after the suspension of diplomatic ties Stephen Harper was rewarded for servitude, er “statesmenship” concerning Israeli interests..

The Ambassador killed in Libya
Three posts on that. Here,  here and here
Recently......US, Libya differ on accounts of Benghazi attackThe narrative changes-

The US ambassador to the United Nations, Susan Rice: “"People gathered outside the embassy (consulate) and then it grew very violent and those with extremist ties joined the fray and came with heavy weapons, which unfortunately are quite common in post-revolutionary Libya and that then spun out of control,"

"But we don't see at this point signs this was a coordinated plan, premeditated attack.”


The Libyans still see it as premeditated- "The way these perpetrators acted, and moved... leaves us with no doubt that this was pre-planned, determined, predetermined," Mohammed al-Megaryef, president of the Libyan National Congress, told CBS News.

"It was planned, definitely, it was planned by foreigners, by people who entered the country a few months ago. And they were planning this criminal act since their arrival," he added.


Planned by foreigners who had previously entered the country? That could be just about anyone?

Why is the US changing the story? It appeared to me from all early reports we were looking at two attacks. The first one the distraction to cover for the second hit. Is the US really going to continue on with the absurd movie protest angle? Why? Is it easier then addressing the killing of the Ambassador as a hit that they or their allies may have been connected to?

Just 5 days after the attack on the consulate in Libay

South Sudan army on Saturday said that 10 of its soldiers were killed and 50 others were still missing when a unit of the army mistakenly bombed a small boat which was carrying southern Sudanese soldiers at Upper Nile area.

"The Sudan people's Liberation Army hired a small boat to transport the soldiers at Upper Nile area. The boat sailed at night and was obstructed by an army unit which tried to stop it. When the boat did not stop, fire was opened on it," Philip Aguer, spokesman for South Sudan's army, told Xinhua correspondent in Khartoum by phone.

"Due to the intensive shooting, the boat drowned. Bodies of the 10 soldiers have been lifted and another 50 soldiers are still missing. Rescue teams are still looking for survivors," he added.

As Ali mentions in his commentary and has been mentioned here previously CIA/Mossad are all over Sudan- playing a direct role in the balkanization of that country.

It would not be that difficult, for well trained, carefully prepared group of soldiers to flee Benghazi and head back to Sudan via the Nile 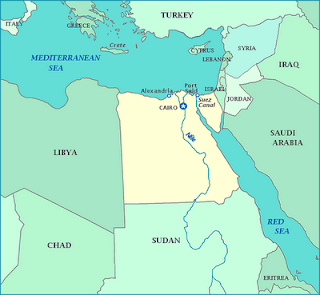 Benghazi is located roughly below the eastern tip of Crete

Just a thought. Could these have been the “foreigners” that arrived previously in Libya waiting for the Ambassador’s return and the cover of movie protests?
Posted by Penny at 3:10 PM