Groundwork to justify strike on Syria being laid out via the media by Israel ?

This has false flag possibility written all over it.

First, here is the news about this being errant fire

Mortar shells fired from Syria have hit the popular tourist site of Mount Hermon in the Israeli-occupied Golan Heights.

However, an Israeli Defense Forces spokesperson told Haaretz that based on similar incidents in the past, they were most likely to have been errant shells fired during fighting between Syrian President Bashar al-Assad's army and rebel forces.
No one was hurt and no damage was reported.

Just the other day, the shells were not a biggie

Then last night Israel announces it may strike Syria again, whenever it feels like it.
As linked in yesterday's post

And suddenly, today, we have a new, previously unheard of, Palestinian group making very beneficial to Israel claims?

An unknown Palestinian group, the Abdul Qader al-Husseini brigades, on Thursday claimed responsibility for firing rockets at an Israeli observation point in the Golan Heights to mark Nakba Day.

Thanks to the handy video work of persons with recording devices & perhaps satellite connectivity able to upload  incriminating video to You Tube???
Gosh, I wonder who that could be? NATO mercs?
Complete, with dramatic music.

We have a false flag potential.....


The claim follows Arabic media reports that Syrian authorities are considering allowing Palestinian armed groups to launch attacks against Israel across the Golan Heights border. ( I did not ever believe those claims, they seemed improbable, no actually they seemed preposterous)

Two Syrian mortars slammed into Mount Hermon on Wednesday morning, marking the first time that the area has been hit since the start of the Syrian civil war two years ago.
Following the incident, IDF Chief of Staff Lt.-Gen. Benny Gantz held consultations with senior defense officials.

Consults with senior defense officials? What happened to errant shells?
Notice that the JP article is mentioning two incidents thereby confusing the facts of the story


The IDF’s policy on Syria continues to be to try and contain the incidents stemming from across the northern border.
The shells exploded in open areas, failing to cause damages or injuries. The IDF is still seeking to determine whether the shells were fired deliberately, or were part of a battle between rebels and the Syrian army.

The IDF's policy on Syria has never been about containing anything. 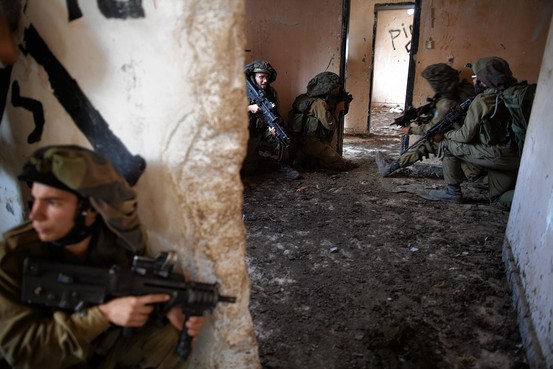 Israeli soldiers of the Golani brigade take part in an exercise Monday (that is May 13/2013) near the border with Syria on the Golan Heights, which Israel has annexed.


After two Israeli airstrikes inside Syria in the past week, Israel deployed Iron Dome rocket interceptor batteries in the north on Sunday and shut down its airspace to civilian air traffic for nearly a day. Residents reported an uptick in soldiers moving around the Golan and Israeli jets overhead.

On Monday, mortars fired by one side or the other inside Syria again crossed into Israeli-controlled Golan. Most of the time, including Monday, the shots seem errant, but Israeli troops have fired back when they thought the parts of the Golan under their control were being targeted.

So many wounded Syrian rebels have run, limped or crawled up to the fence separating the Golan from Syria that the Israelis have quietly started treating them in a local military hospital.

Israel may be safer overall with enemy Arab states such as Iraq and Syria in disarray, say many Israeli military officials. (that should not be a surprise to anyone who has read here for more then 2 years now)

Some of the most intense fighting in Syria is shifting to the country's south, close to the borders of Lebanon, Jordan and Israel.

"Every additional airstrike endangers the fragile status quo between Israel and Syria," wrote Amos Harel, the military commentator for Haaretz. "The troublesome question now is, where is Syrian President Bashar al-Assad's red line?" (Where is Assad's red line? Interesting.  Is Israel baiting Syria?)

So, will Israel take another shot at Syria? As they have threatened? To see "where Assad's red line" is?
I can't discount this.