The hostage taking. In a mall, of all places? But, not just any mall, no, an upscale mall.
A mall where white western diplomats from across the globe shopped.
A mall that was most definitely not for the masses in Africa.  The ordinary people might go to a market.
Or just sustain themselves?
However, this is a mall that would definitely  hold the attention of the main stream western media audience Even the name Westgate would be very easy for the receptive western audience to remember. It would stick in the mind. Right? Of course! WESTGATE. The perfect mall to plant yet another terror meme into the psyche!
The Westgate. A gate to the west.
Perfect.

Thinking about the alleged goal of 'terrorism' which is to force change within a government or nation, through violent means. Does storming a shopping mall seem appropriate? As opposed to the storming of a building/structure/institution representative of the government being challenged?  I don't know? I just find the whole mall thing odd from the perspective of a 'terror group' displeased with a state apparatus.

However, if one looks at the mall storming as a means to terrorize the populace. Both foreign and domestic. Who might then demand some policy/ leadership or security change from the apparatus of the state? Or comply with more lost freedoms for security? While believing all this 'terror' to be organic? A mall storming could make sense.

The Westgate Mall:  Fire and Collapse

Apparently, part of this mall collapsed or was destroyed by security forces? 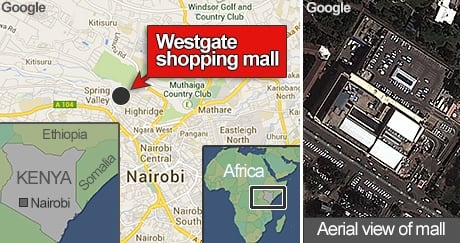 Three floors of the mall collapsed and several bodies were trapped in the rubble, said Kenyatta. His office later said a terrorist's body was among those in the debris.

You are probably wondering how it is that three floors came to collapse onto one another killing hostages and hostage takers alike. And why is it being claimed that 'government forces demolished parts of a mall that was the scene of a four-day stand off '

Does that strike you as odd at all? Because it strikes me as very odd!

Let's all  think about the fire that led to the collapse that led to the mall being demolished in sections, that lead to evidence being destroyed permanently.  Fire is after all the ultimate cleanser.
Who could have started the fire and why?  Of course the talking head/narrative creators are implanting us with the concepts/idea/meme that the 'terrorists' started the fire. What purpose would be served by the Shabab doing that?


Three floors collapsed after the blasts and a separate fire weakened the structure of the vaulted, marble-tiled building. Officials said the blaze was due to militants lighting mattresses as a decoy.

How does the official know for certain the militants set the fire? (Narrative creation in action?) "As a decoy"  A decoy is a device that serves as a distraction or to conceal something else.
What did the militants have to conceal? Their agenda was plain to see. Terrorize. Storm a mall, scare some people, make frightening statements and largely end up dead. Pretty straightforward stuff.
There need for a decoy doesn't seem strong.
However the special forces, Israeli and Kenyan (we will get to that) could certainly use a decoy or distraction, could they not? Maximize casualty counts. Rid themselves of colluders that might not stay quiet. Hide evidence that could point to a different agenda. Destroy evidence in general. Enabling the state to create a specific narrative.


Esipisu said floors of the mall collapsed after a fire started by the al-Shabab attackers caused structural weakness in a 3rd floor parking lot, which then came down onto the second floor and brought it down onto the first, or ground floor.

The Shabab affiliate claims these forces were unable to enter, I do not believe that claim at all!
So why would the Shabab claim the security forces failed? Bravado? Maybe.
To obfuscate/play down the presence of Israeli personnel? And the numbers involved? Possibly.

One Kenyan security source, who asked not to be identified, told Reuters that the Israeli military was involved in the operation, while a private security official also said they were helping comb the mall.

So, we have Israeli special forces immediately at the Westgate Mall. Israeli Times:


"On Monday, Israeli defense officials confirmed a team was dispatched to Nairobi within hours of the hostage crisis."

Israel has taken the leading role among foreign countries in aiding and advising Kenyan forces after al-Shabaab Islamist extremists attacked the Westgate shopping mall in Nairobi, according to security and intelligence sources

A defence ministry official told the Guardian that a team from Israel's elite counter-terrorism unit had assisted the Kenyan authorities in handling the hostage crisis.


Curiously, or not,  Israeli 'forensic' experts are involved in helping with the 'aftermath of the attack'  (Think cover up)
*Keep in mind.  The mall is partly owned by Israelis. (Insurance claims)


Israeli forensics experts are helping the Kenyan government comb the site of the terrorist takeover of the Westgate Mall.

Israel has had a role in helping the Kenyan government handle the crisis, but the extent of Israel’s involvement is not entirely clear.

The Israeli involvement is so deep in this whole saga that one can't help but come away with the idea that this was an Israeli controlled psyop from start to finish. The mall owned partly by Israelis. One of the stores Israeli forces entered through owned by Israelis. The presence of Israeli special forces. And the involvement of Israel in the forensics.

What to make of this? H/T anonymous commenter

Officials warned Nairobi that WESTGATE mall was a target
Of course, it was Israeli officials..................


SECURITY officials in Israel have warned for a long time that Nairobi's Westgate mall was a prime target for a terrorist attack.

Several cafes and restaurants within the complex are Israeli-owned, including the ground-floor Artcaffe, the apparent entry point for the assault by the eight armed militants.

And yes, there will be more

Starting below, though at some point in time I may edit into one piece. Or not?
But the info above and below should be taken together. Enjoy the read and share a thought or two.

Pt 2-Kenya: Westage mall seige ends with explosion and floor collapse!
Posted by Penny at 10:01 AM