Four top environmental scientists raised the stakes Sunday in their fight to reverse climate change and save the planet. ( More like push business for the nuclear industry) Climate and energy scientists James Hansen, Ken Caldeira, Kerry Emanuel and Tom Wigley have released an open letter calling on world leaders to support development of safer nuclear power systems. Wait -- pro-nuclear environmentalists? Isn't that an oxymoron? Apparently, not so much anymore. 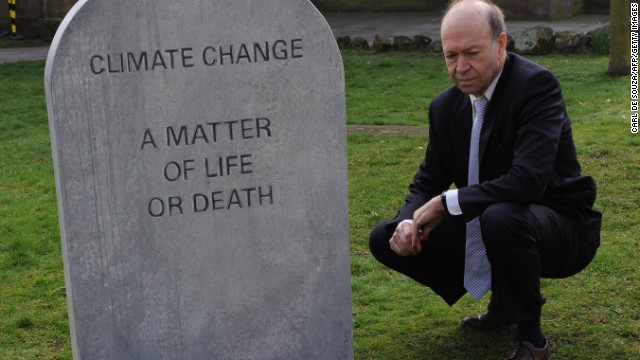 James Hansen and his conspirators release this letter right as CNN is set to do a promotional for nuclear power...

But, that is just a coincidence. Right?


Nuclear power is burgeoning in some parts of the world and shrinking in others. Asia is embracing it -- except Japan -- which is still struggling to figure out how to safely deal with the dangerously radioactive Fukushima nuclear power plant.

Then we get the Al Gore environmentalist meme being bolstered.
Al Gore doesn't support nuclear power because he loves Mother Earth and kitties and puppies too.
Yet, Al Gore feels it is ok to have a giant carbon foot print as long as he buys carbon offsets?
That he is set to make a ton of money from in the carbon market.

The four scientists say they have no connection to "Pandora's Promise," which blames resistance to nuclear energy on groundless fears rooted in the Cold War, Chernobyl in 1986 and 1979's Three Mile Island.

There you have it- You have groundless fears.
Those nukes that hit Japan. Much ado about nothing.
Chernobyl.- What ever?
Fukushima. Fukushima?  Oh, that's all taken care of.

This is why we have not been told much of anything about Fukushima these past couple of years.
The carbon cult was always pushing  the nuclear power as saviour meme. I covered this years ago here at this blog.

With the onset of the Cold War in the early 1950s, the United States sought to change the image of atomic energy from a force of awesome destruction to one of peace and prosperity.

That idea that the world should benefit from peaceful applications of nuclear energy was the centerpiece of an initiative launched by President Dwight D. Eisenhower that became known as "Atoms for Peace."

In a speech to the United Nations General Assembly in December 1953, Eisenhower proposed a nuclear strategy that would harness the peaceful applications of atomic energy for countries around the world. Eisenhower reached out to the Soviet Union, saying the time had come for the "two atomic colossi" to work together to build a more peaceful world. Otherwise they were "doomed malevolently to eye each other indefinitely across a trembling world."

At the core of Eisenhower's plan was a new international atomic energy agency, to be set up under the auspices of the United Nations.  (This is of course the IAEA)  According to historian John Krige, Eisenhower called on the major powers, notably the United States and the Soviet Union, to "make joint contributions from their stockpile of normal uranium and fissionable materials" to the new agency. The nuclear material would then be allocated for medicine, agriculture and, above all, "to provide abundant electrical energy in the power-starved areas of the world."

The program was also a product of Cold War rivalries, notes Krige. "It was an effort to win hearts and minds and make sure that countries like India, or Iran or Israel, that wanted nuclear technology would get it from the U.S. and not be tempted to get it from the Soviet Union." Krige says the plan also opened new markets for big U.S. corporations such as General Electric and Westinghouse.

New markets to build heavily tax payer subsidized nuclear power plants.
The more things change, the more they are exactly the same! Only now, the excuse is carbon and AGW.


Author Catherine Collins describes Atoms for Peace as a "nuclear Marshall Plan which would promote the safe and peaceful uses of atomic energy and at the same time monitor the use of it, so it couldn't be diverted to weapons programs."

Collin notes a p.r. element at work. When the initiative was announced, the United States was engaged in a major build-up of its nuclear arsenal which included controversial tests of hydrogen bombs in the Pacific. "There was growing concern both inside the U.S. and internationally about the impact of these nuclear tests," says Collins. "So they used Atoms for Peace as a sort of distraction." Atoms for Peace allowed the great powers to maintain their nuclear monopoly while promoting the idea that nuclear energy could transform the global economy and pull developing countries out of poverty.

Atoms for peace as distraction from controversial hydrogen testing. Sweet!

Krige and other historians have noted the positive legacy of Atoms for Peace. (questionable?) The program was successful in creating the International Atomic Energy Agency, and a web of safeguards which the IAEA imposes on member states. The initiative also planted the seeds for the Nuclear Non-Proliferation Treaty, the cornerstone in global efforts to contain the spread of nuclear weapons.
However, in some ways Atoms for Peace backfired. Several countries that received training and technology transfers through Atoms for Peace eventually used that knowledge platform for illicit weapons programs. India, Pakistan, South Africa and Israel all received direct or indirect support through Atoms for Peace. Each of these countries later built secret nuclear weapons stockpiles.

Not such a positive after all

And one more place the AGW crowd meets up snuggly with the Military Industrial Complex
Never a word about the endless wars and the catastrophic consequences to the environment
Never a word.
Never an utterance about the scam of globalization with the long distance shipping and all the pollution that entails- Not a problem for the AGW crowd that people are exploited via low wages, all used up, for bigger profits
That dirty job is left to people such as myself.