After yesterday's turnout in Lebanon .....Syria. Ukraine. Election Spin? And more!
Check out Day 2!  Pay attention to the flags the Syrians are flying? - NOT the flag initially toted around by the NATO backed terrorists/ mercenaries/hired killers

Hundreds of Syrians living in Lebanon lined up outside their embassy near Beirut on Thursday to vote ahead of their country's presidential election as expat balloting was extended for another day in the neighboring country.


Tens of thousands is the most appropriate description


Syrians in Lebanon vote for president for 2nd day

Syrians in Lebanon battle crowds to vote for Bashar al-Assad 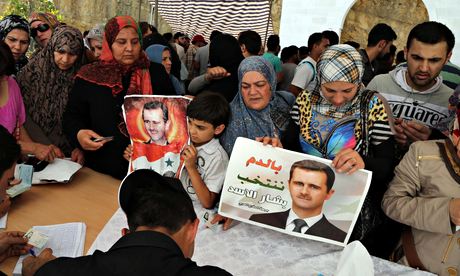 Syrians desperate to vote for Bashar al-Assad tried to rush their embassy near Beirut on Wednesday, scuffling with Lebanese troops using batons and sticks to beat the crowds

Let me say it again!- Flies right in the face of all the western/NATO media lying