The US warns China not to raise tensions in East Sea


The White House has described China's placement of an oil rig in Vietnam’s waters as a provocative act and warned Beijing not to raise tensions in the region.

Scuse my language, I have just woke up, pretty much, but- WHAT THE HELL!
Apparently only the US can 'raise tensions' and undertake all sorts of provocations and dictate to every other nation on the planet regarding the way that nation conducts their affairs?! 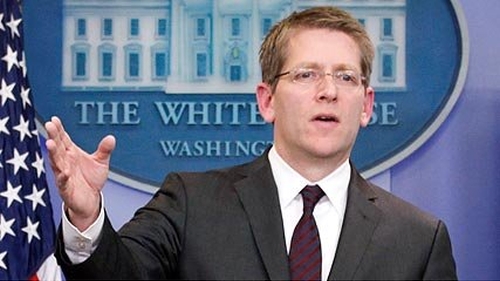 The US claims this rig is 'deep inside Vietnam's" turf- But is it?


On May 16, White House spokesman Jay Carney had a message for Beijing, “We consider that act provocative and we consider it one that undermines the goal that we share, which is peaceful resolution of these disputes and general stability in the region."

The White House condemnation came one day after a top Chinese military official visited the Pentagon and indicated Chinese forces do not intend to back down.


The US official said China's dispatch of numerous government vessels to the area threatens stability and called for restraint on both sides.

“We're very concerned about dangerous conduct and intimidation by government-controlled assets operating in this area and we call on all parties to conduct themselves in a safe and professional manner," said Carney.


In case you hadn't noticed anti-China protests had suddenly broke out in Vietnam and  those protests  have taken a deadly turn  China evacuates 3,000 from Vietnam as tensions grow

"Last weekend, Vietnam permitted anti-China protests that drew thousands of people, a rare step that allowed it to amplify state anger against Beijing. Doing so was risky for authorities. Dissident groups joined the protests"

We have witnessed events such as this time and time again

Vietnam and China are embroiled in tensions over a Chinese oil rig near the Paracel Islands. Popular opposition has even sparked anti-China riots in Vietnam. The U.S. and China traded barbs in statements about who is to blame for the current situation. The U.S. State Department, including Secretary John Kerry, has called China’s placement of the oil rig “provocative.” Chinese Foreign Ministry spokesperson Hua Chunying fired back, saying “It is nothing but the wrong words and actions made by the U.S. side on maritime issues that have emboldened some countries to take provocative actions.”
The topic came under intense discussion at the joint press conference. In response to a reporter’s question, Fang repeated China’s official stance that the oil rig is within China’s waters and thus the activity is normal and legitimate. Fang also added some interesting details, such as that the placement of the oil rig had been “carefully selected” to minimize the chance of a dispute. According to Fang, China was surprised and dismayed at the reaction. He pointed out that other countries (referencing Vietnam) have previously drilled in the region without a similar backlash.
However, Fang underlined China’s commitment to both its territory in general and the oil rig in particular. On territorial issues, Fang said, China “will not give an inch” and he warned that China has the means to back up its words with actions. On the oil rig, Fang promised that “we will make sure this well is successfully drilled” without interference from the outside. He said China was willing to discuss the issue with Vietnam but would not cease the drilling activity.
When it was his turn to field questions about the Vietnam-China spat, Dempsey went over some of the issues he had discussed with Fang previously.  “We have to acknowledge that there are disputes, territorial disputes, that are in play here,” Dempsey said. China has insisted the area where the oil rig is located is not under dispute. Dempsey also said he had discussed with Fang that the use of military assets to resolve disputes is provocative. Finally, Dempsey suggested that the interpretation of what, exactly, is the “status quo” in disputed regions may be up for debate.


Finally.... pivot to Asia- PATO and that big Russian/China oil deal- all connected


From late yesterday- Zombie Apocalypse Revival- Numerology and 8888?
Posted by Penny at 8:35 AM

Email ThisBlogThis!Share to TwitterShare to FacebookShare to Pinterest
Labels: China, CIA, UN, US