Russia's Ministry of Defense brought 11 foreign military attachés, including one from the U.S., to a neighborhood on the Russian side of the border where Moscow accused Kiev's forces of shelling a residential house on Sunday, killing a 47-year-old Russian man and wounding two others.

The delegation inspected a neighborhood in the Rostov region that Russian officials said was hit by six 120-mm artillery shells from the Ukrainian side, where Kiev's forces and pro-Russia separatists have been facing off for months.

Russian Deputy Defense Minister Anatoly Antonov said he invited the foreign military attachés to show them how the Ukrainian government was obscuring the truth about the increasing number of artillery strikes hitting Russian border towns.

Russia- not hiding anything.

"The use of heavy artillery systems by Ukraine's armed forces has not only led to the destruction of our peaceful towns, but worst of all to the death of a Russian citizen," Mr. Antonov said. "But at the same time the Ukrainian side is cynically denying the clear facts and doing everything possible to deflect accusations of its shelling of Russian territory."

The Ukrainian government has denied that its forces fired on the Russian town. Instead, Kiev has focused attention on the downing of an AN-26 Ukrainian military cargo plane with eight people on board over the skies of the Luhansk region on Monday.

Meanwhile, Ukrainian forces denied carrying out an attack in the Donetsk region that hit a residential building on Tuesday morning. 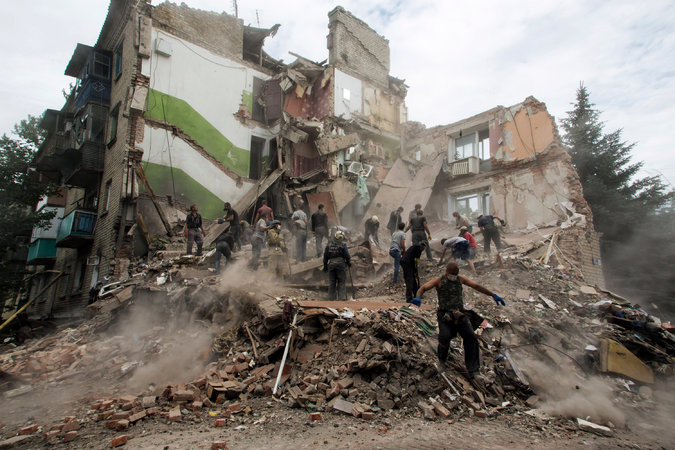 In Donetsk, the strike hit an apartment complex in the city of Snizhne, not far from the Russian border, leaving 11 civilians deadand eight wounded, said the Donetsk regional administration. The pro-Russia separatists in Donetsk described the attack as an airstrike carried out by the Ukrainian air force.

The government swiftly denied blame but was not immediately able to offer an alternative explanation.

The Ukrainians, meanwhile, are stepping up their campaign to provide evidence of Russian involvement in the conflict, including their accusations about the downed plane.

Shortly after Monday's aviation incident, Ukrainian President Petro Poroshenko's office said the military cargo plane had been flying at an altitude of 6,500 meters and so couldn't have been shot down by the rebels' portable antiaircraft missiles. The plane "was struck by another, more powerful missile, which was probably launched from the territory of the Russian Federation," the office said.

"The president has issued instructions, and by the end of the day, an investigation will be completed and irrefutable evidence will be prepared complete with maps," he said, the Interfax news agency reported.

As of late Tuesday, the report hadn't become public.


EU leaders plot strategy over Ukraine/Russia
No sanctions of any substance.


EU diplomats are looking at new sanctions that would go beyond the current travel bans and assets freezes against individuals but still fall short of full economic and trade sanctions.


EU may impose new Ukraine sanctions, will fall short of US wishes

European Union leaders, under U.S. pressure to take a tougher stance towards Russia over the Ukraine crisis, could give the go-ahead on Wednesday to new sanctions but they will fall short of the far-reaching economic measures Washington wants.

Washington can go it alone and destroy it's economy-

The United States is considering imposing unilateral sanctions on Russia for its actions regarding Ukraine.

After weeks of inaction, the officials say the U.S. is now prepared to move forward alone if EU officials fail to enact strong sanctions during a meeting Wednesday in Brussels

During a Group of Seven meeting in Brussels in early June, Western leaders warned Putin the broader penalties could be levied within a month if Russia did not meet specific conditions, including recognizing the results of Ukraine's May 25 election????

If Obama moves forward with unilateral sanctions, he'll face opposition from the private sector. U.S. businesses have been pressing the administration to hold off on sanctions that could put them at a disadvantage in the global economy.

"It's not clear to us that breaking commercial ties with the Russia partners, consumers gets anyone to where they want to be," said Gary Litman, vice-president for international strategic initiatives at the U.S. Chamber of Commerce.