*Updated with new accusations and additional information- scroll down, please

Interesting timing for the rats to jump ship? 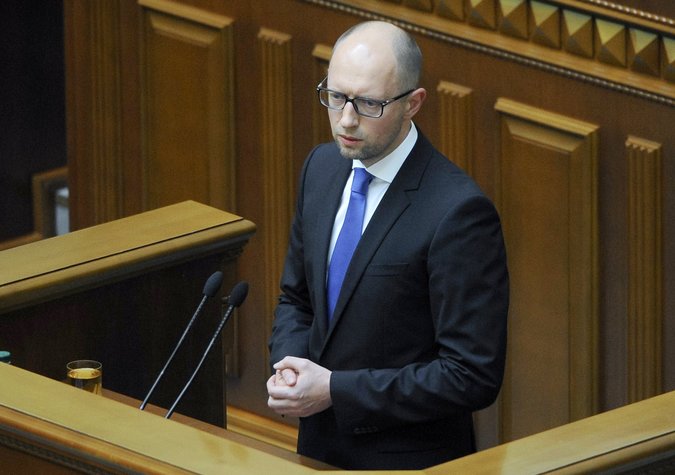 Arseniy P. Yatsenyuk, a "pro-Western technocrat" who has guided the Ukrainian government through the tumultuous months since the ouster of President Viktor F. Yanukovyvch, resigned abruptly on Thursday, after the governing coalition of Parliament collapsed.

“I declare my resignation in connection with the collapse of the coalition and blocking of government initiatives,” Mr. Yatsenyuk said from the rostrum of Parliament, according to Ukrainian news services.

Did these sanctions get passed before the collapse?

The Ukrainian Cabinet, which includes Prime Minister Arseniy Yatsenyuk, resigned on Thursday, he said. Yatsenyuk, who made the announcement to parliament, cited the "collapse" of the coalition running the besieged government

*Read below and you will get the idea that this was a planned, expected move


The government crumbles when American military advisers are headed to Ukraine?-

Or were the fascist thugs just unable to cooperate?

Ukraine's prime minister announced today that he is resigning after two parties said they were withdrawing from the ruling coalition.

"I am announcing my resignation in connect with the collapse of the coalition," Prime Minister Arseniy Yatsenyuk said, adding Parliament could no longer do its work.

Parliament speaker Oleksandr Turchynov said it was up to Udar and Svoboda to propose a candidate for temporary prime minister to lead the government until early parliamentary elections can be held."

Udar and Svoboda to propose a temporary prime minister to lead the government until elections?
Guaranteeing yet another western backed technocrat/ fascist thug to be in place.
Maybe it will be Klitschko, himself ? Recall that Victoria F the EU Nuland thought he needed to gain experience, which is why she wanted Yats, but, who knows maybe he has now gained some 'experience'?


The Obama administration is accusing Russia of firing artillery to hit Ukrainian military sites and planning to send pro-Russian separatists more lethal weaponry.
The State Department says the U.S. has evidence that Russia is shelling Ukraine from sites inside Russia. Spokeswoman Marie Harf also says the U.S. has new evidence Russia intends to deliver "heavier and more powerful multiple rocket launchers" to separatists battling Ukrainian forces in the east of the country.
Harf declined to provide details or elaborate on the evidence because she said she could not get into intelligence "source and methods."

Has evidence. But, could not elaborate.


"I think this is a fully expected and planned development," said Balazs Jarabik, visiting scholar at the Carnegie Endowment for International Peace. "The president and the government coalition looked for ways to clear the legal way for an early election, as they are under a lot of pressure from Maidan and the public."

When he took office, Yatsenyuk's administration was expected to be a brief one because it was taking over with the government almost broke and facing the likelihood of adopting unpopular measures to satisfy conditions for rescue loans from the International Monetary Fund. It succeeded in landing the IMF bailout and last week IMF officials said the government was meeting almost all its financial targets.

The Yats resignation- Not unexpected, at all. Yats was just empowered long enough to enslave the Ukrainians to the IMF's austerity. Where is Poroshenko in all this?

Email ThisBlogThis!Share to TwitterShare to FacebookShare to Pinterest
Labels: EU, Ukraine, UN, US