James Foley?
James Foley, whatever his situation or affiliations, knew going into a war zone came with potential repercussions. Including death.

1-Problem- How to sell the justifcation/need for wider war to the masses?

Create a ‘beheading” story? Fan it up. Lots of coverage. An abundance of self-righteous outrage, demands for justice etc.,
Making conditions right for the already anticipated......................................
2- Reaction.
Let's examine a bit of the conditioning being created to guarantee the proper reaction for the predetermined outcome, which we will get to!

MSM- An overabundance of news stories for an alleged beheading. Geez there have been so many, real ones..that the main stream media looked away or downplayed?  If this beheading actually took place and that is a big if, right now. Why the reams and reams of promotional coverage?

BTW: US Intelligence is claiming the video is real. So what? That doesn't make the beheading real.    No more real then any beheading that takes place in a Hollywood gore flick- That video is real, also!


"the intelligence community reviewed the video and has "reached the judgment that this video is authentic."

And there you have it!  The intelligence community (appeal to authority, says so, so it must be)


CBC- "He gave his life trying to expose the world to the suffering of the Syrian people," said the statement, which was attributed to Foley's mother, Diane Foley.

This alleged posting is a huge red flag for me. Why?
Mr Foley is 40 years old, which would make his mother minimally early ‘60's possibly even in her ‘70's
Not the usual facebook participant: Stats on ages of facebook users!

It appears that persons in Diane Foley's age group equal about roughly 11 percent of Facebook usage So, odds are stacked against Mr Foley's mom being an actual facebook user.
But, that is not all! No, that is not all.....
Keep this in mind!  There are known to be 83 million fake profiles on Facebook
How many unknown fake profiles are there? The number is likely more then 83 million fakes.
Therefore when we consider- a) Mr Foley’s mother’s age-b) Face book usage stats for that age group. Plus- c) the numbers of fake accounts on Facebook.
A person can't really give any credence to the statement the msm “attributes” to the mother.
Personally speaking. As a mom and sentient human being, I find this type of activity on the part of a grieving parent completely non-credible. Sorry, if someone just killed my child,, I wouldn’t even be here at this blog.
So, for that reason along with all the others mentioned I don’t believe the statement attributed to the mother is anything but part of some public relations ploy to whip up support for the, already planned and desired by the elites warmongering psychopaths, 'solution'

That is the only video I could find. I do not see anyone being beheaded. A beheading is certainly suggested. But, suggestion doesn't tell us anything. It only allows us to run away with our emotions and imaginations if we choose to.
I notice the British sounding accent- British Special Ops?
I also notice the editing?
What I don't see is any beheading.
I know Kenny had a link to a video purporting to show this alleged crime,but, I couldn't view it at his link
Link available in the comment section


3- Solution.
In problem, reaction, solution, the "solution", is always that which was planned for all along.
The solution in this case means-Pushing the war into Syria.- This has been obvious for sometime.
This was the intended outcome from the arming of the Kurds, the American military involvement, the request for no fly zones and the involvement of the PKK terror group.
That was one I hadn't got around to. Though I did save articles to use?  The PKK has been involved in Northern Iraq for quite some time now.

To the west, they are terrorists, yet they are now fighting on the same side as their interests converge with the US in the fight to help Iraq’s Kurdish forces stave off a jihadi offensive.

But Yazidis may better remember the role of Ankara’s rivals. The PKK’s sister group in Syria, the People’s Protection Units (YPG), was the main force battling Isis and helping them escape.

The YPG – whose numbers are believed to be over 20,000 – is probably the most successful group fighting Isis. The jihadi group got its start in war-torn Syria and launched some of its first offensives against Syrian Kurds, who managed to defend most of their enclave.

“The only force that has consistently fought Isis for the past two years was the PKK, under the name of the YPG,” Mr Zagros said. “So who’s the one really fighting terrorism here?”

So brand PKK terrorist and brand YPG were always one in the same and the first offensive the militant Kurds launched was against the Syrian Kurds.... (bringing them in line?)

The West has always had a soft spot for their terrorists... so called. Because clearly they are not terrorists if they are part of the team! With the same goals.

UPDATE #1- Flashback to old post for the images of Mr Thaci and pals along with the background.

Skopje. After the police in Kosovo arrested some 40 people accused of terrorism, it is expected the list of suspects will be expanded by at least 20 people, the Macedonian online news edition Dnevnik writes.
The leaders of the Islamist movement Bashkohu [English: Join] of Fuad Ramici and at least 4 imams accused of incitement to hatred and recruiting people to take part in terrorist organisations are among them, Koha Ditore newspaper of Pristina said.
The influential Kosovan imams are from Pristina, Gnjilane and Kosovska Mitrovica and are accused of being directly linked to the terrorist organisations Islamic State and the Al-Nusra Front.
Blerim Kuçi, former interior minister of Kosovo, thinks Kosovan Prime Minister Hashim Thaçi and the Democratic Party of Kosovo are to blame for this as they are in a coalition with the extremists and won the elections for this reason.

It surely looks as if northern Iraq is hosting a NATO terrorist reunion.
This beheading, likely not real, is all the impetus the terror states - US, UK, France, Israel (NATO) along with their terror minions need to push into Syria and make that new oil state of Kurdistan... 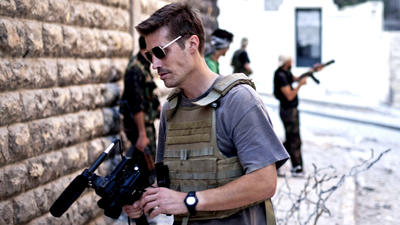 
majestikaAugust 21, 2014 at 12:18 AM
http://www.theguardian.com/world/2014/aug/21/elite-forces-us-raid-syria-james-foley-failed
So we're to believe that special forces are deployed to rescue civilians?

In a surprise development Syria warning the US against airstrikes in the country...

“Any unilateral action beyond UN Security Council Resolution 2170 will be considered an act of aggression against an independent state,” Syrian Deputy Foreign Minister Faisal Miqdad said on Wednesday.


A bit more from the article

Syria’s state-run SANA news agency quoted Miqdad as saying the US “should refrain from using the international community’s resolutions to cover for interference into internal affairs of other states.”


Because it hasn't been toooo flippin obvious this was exactly the direction the US and company are heading? How long have I been mentioning it?  Surely, Syria's gov can see what is right in front of everyone's face?!

With the alleged brutal murder of American journalist James Wright Foley, a wave of anger and aggression across Western audiences has been generated. Upon that wave rides two objectives. One is to create plausible deniability for the West which created the Islamic State in Syria and Iraq (ISIS), the other is to create a further pretext to justify a resurgence of direct US military intervention across the region.


Yup, a wave of anger and aggression has certainly been generated- the reaction factor!
Posted by Penny at 1:23 PM