Since the US started bombing Syria- I have been trying to understand, why it is that  Damascus has  remained mostly silent on the raids. Bombing  the areas that have been under siege for so long can do nothing but assist Syria in their fight against the takfiri- But, what about the very obvious fact that the US& Israel want Assad gone. And will inevitably try to fire on Syrian targets.

Perhaps Syria does indeed have very superior air defences? And those air defences are cause for concern?  The audio isn’t available yet, but, will soon be. Regardless I am posting it for your enjoyment, when it does become accessible

Audio for this story from Weekend Edition Saturday will be available at approximately 12:00 p.m. ET.


Available since 2005, the $90 million F-22 fighter was simply more machine than the military had needed - until there were worries about whether Bashar Assad's air defenses would stand down.


Syria's air defence systems would definitely explain why it was the US rolled this stealth fighter out ostensibly against ISIS, when the jet was very clearly overkill. This fact is noted by the Spencer Ackerman @ the Guardian 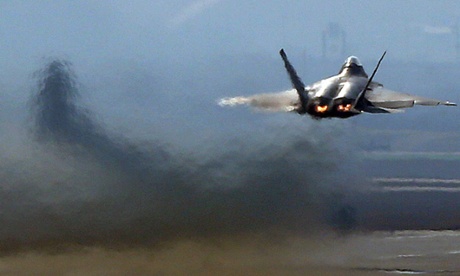 So, in just over a couple of hours from now, this audio will be available, I will be glued to my computer speakers! :)
Posted by Penny at 9:47 AM