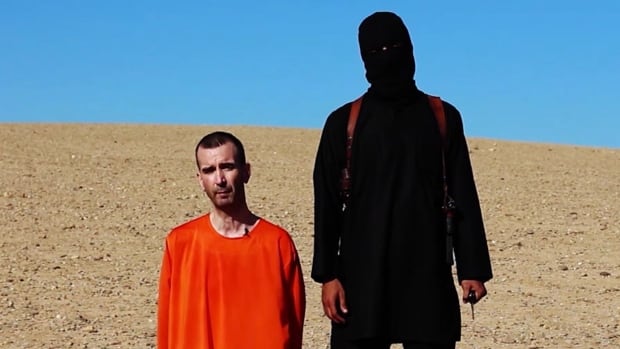 Ok, I can't pass this shit up- It's way toooo theatre of the absurd
Another beheading video- but, nothing is shown. Went back to get it off of You Tube and it's gone!!
(if you see it, leave a link?)
This video is  so formulaic. But, not credible. Other then from a catapulting the propaganda point of view?
The first video I viewed didn't show the decapitated head prop at the end. And, like all the beheading videos prior, there is no beheading actually shown
You know what else was interesting? The "ISIS" actor says that David Haines served with the Royal Air Force... Curious? Or not really? Just another spook masquerading as a humanitarian!

The video below is the closest to the taken down one. Look at the logo in the right hand corner!
SITE- pretty much guarantees this is yet another psyop


ISIS militants fighting in Iraq and Syria released a video on Saturday which purported to show the beheading of British aid worker David Haines.

Reuters could not immediately verify the footage. Two U.S. journalists, James Foley and Steven Sotloff, have been executed by ISIS.

Haines, a 44-year-old father of two from Perth in Scotland, was kidnapped last year while working for the French agency ACTED.

Took a few minutes to check out ACTED- Just another No Good Organization- Check out their partners and the countries they 'work' in- Think NATO/UN/OWO/ creepy intertwined organizations that exploit populations for psychopathic elites. Making it a non surprise that Mr Haines was military

A few other news outlets reporting on this story

Since I  want everyone to realize that this is yet more trauma based perception management reinforcement here again is this post, from September 11/2014.
Take the time to watch it and consider the information presented, please.


Ukrainians call for a Separate State