How Israel and the US love the Kurds. Let me count the ways....

So, I came across one article yesterday, another today, while looking for yet more facts to solidify the case that the Kurds are not victims, having no one one their side, as proclaimed by the perception managing media. This false presentation has taken in others. Has fooled them. Has caused them to believe lies. And take cheap shots at myself. Tsk. Tsk.I had thought these persons were more savvy to media manipulations.  Alas..... that was not the case.

Is it me or am I the only blogger, or one of a very few that are pointing out the collusion between Israel/NATO/US and the Kurds in all their terrorizing war making glory. Am I missing it all? I read around and the only other person mentioning the duplicity of the Kurdish elites is  Syrian Perspective Why?

And, my oh my how quickly the mainstream media is to excuse the many terror attacks perpetrated by the Kurds against many innocent persons- Particularly in Turkey, over the course of many years. All to push the agenda. Sell the lie.

MK’s article is more relevent then ever when one considers what is happening as I post this!

During 1983-98 when PKK terrorism was rampant, the Turkish military conducted cross-border operations inside Iraq about 36 times. Some operations were of a large scale, involving air force and heavy armor. In 1997, troops at corps strength of up to 50,000 crossed the border and went 200 kilometers into Iraqi territory.

15 years of terrorism against Turkey and the whole time the Kurds of Iraq are firmly in bed with Israel.........


Turkey refused to cooperate with the US invasion of Iraq in 2003. The strain persists, in spite of appearances. Meanwhile, the Kurdish militia has proved to be a valuable ally of the US. Kurdistan has since become the staging ground for US and Israeli intelligence's covert operations against Iran. It is a strategic asset in the event of any US military strike against Iran.

Over and above all, the fabulous oilfields of Kirkuk beckon US and Israeli business interests. Evidently, it is in the interests of the US and Israel that the region must remain an oasis of stability. Israel, in particular, would gain immensely if Kurdistan gained full independence.

Also, Kurdish nationalism can be a potent weapon for Washington's geostrategy. It modulates the complex triangular equations involving Turkey, Iran and Syria. The United States' ultimate intentions in Kurdistan remain obscure. Washington keeps assuring Turkey of its sympathy in fighting terrorism but does little to curb PKK activities. Barzani is diverting US arms supplies to the PKK.


“In short, the escalation of PKK violence; Barzani's belligerence toward Turkey; the United States' double standards toward Turkey's "war on terror" - these form a puzzle that Turkey must figure out” 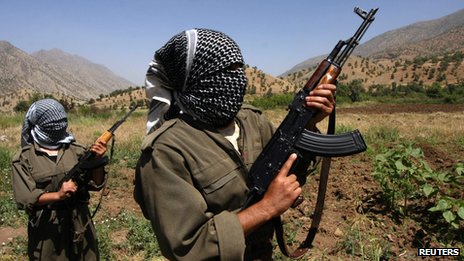 PKK Terrorists- The scarfed heads are such a familiar site- BBC

Escalation of Kurdish violence. Barzani’s belligerence and US double standards all verify or validate my proposition that Turkey is being set up, to fall.

Here is something else I informed my readers of sooo many years back regarding the Turkish military- Loyalties lie elsewhere!

“A dozen knots tie the US Army and the Turkish military, dating to doctrine that took its name from the late US president Harry S Truman and which saw the US Congress grant military and economic aid to Turkey and Greece”

The Turkish military would feel disoriented if these close ties were snapped. A similar predicament holds good for the Turkish political elite, including serious politicians (both secular-minded "Kemalists" and "Islamists"), powerful captains of industry and business, and even much of Turkey's intelligentsia weaned on Western enlightenment.

Bringing this up to date- July 2014 Pepe Escobar

Why Israel is in love with Kurdistan

“Iraq is breaking up before our eyes and it would appear that the creation of an independent Kurdish state is a foregone conclusion.” The analysis might have come straight from ISIS – but in fact came from none other than former bouncer and unreformed Zionist, Israeli Foreign Minister Avigdor Lieberman.

What the invariably truculent Lieberman told US Secretary of State John Kerry this week pertained mostly to the Kurdistan Regional Government (KRG) in Iraq, an autonomous region that - quite handily – is also exporting oil to Israel (the KRG angrily denies it.)

By all practical purposes, Kurdish Peshmergas are now also in control of heavily disputed, oil-rich Kirkuk – after the ignominious withdrawal of Baghdad’s predominantly Shi’ite army as ISIS was advancing. The wily KRG president Masoud Barzani has been adamant; “We will bring all of our forces to preserve Kirkuk.”

Talk about being handed over The Big Prize on a plate; the KRG has been trying to control Kirkuk by all means necessary since the 2003 Shock and Awe. In any future scenario Kirkuk would be the absolutely fabulous gas station fueling the wealth of a prosperous Kurdish nation. Baghdad is confronted with yet another quagmire.

It’s no secret in the “Middle East” that Tel Aviv and the Kurds have had a fruitful working relationship – in military, intel and business terms - since the 1960s. It’s a no brainer Israel would instantly recognize a possible new Kurdish nation-state. No wonder Israeli President Shimon Peres, also this week, told US President Barack Obama, “the Kurds have, de facto, created their own state, which is democratic. One of the signs of a democracy is the granting of equality to women.

So why this sudden interest in the welfare of Kurdish women? Something fishy is afoot. Rupert Murdoch’s Wall Street Journal is heavily peddling Kurdish independence. What is Tel Aviv really up to here?

The consensus narrative in Israeli media is that Kurdish independence is “good for Israel” because Kurds, well, they are not Arabs, Persians or Turks. Kurdistan – at least Iraqi Kurdistan – is seen by Tel Aviv as a “non-hostile entity” that, crucially, is not exactly touched by the plight of the Palestinians.

From a strictly Israeli point of view, Kurds are regarded as moderate, secular Muslims who have been victims – and that’s the key operative notion – of Arab chauvinism, be it on nationalist or hardcore Islamist terms. At least in theory, Kurds won’t antagonize the notion of “Jewish self-determination.

And even more crucially, projecting ahead, a Greater Kurdistan would be the ideal buffer state acting in tandem with larger Israeli strategic interests; in one go, it would simultaneously amputate Turkey, Iran, Iraq and Syria.


Even an independent Iraqi Kurdistan would be not only the proverbial “friend of Israel” but also a viable, prosperous state; Irbil, for instance, even though it is not Arab, wants to market itself as the Arab Capital of Tourism. And all this in a region Tel Aviv regards –paranoia included – as a basket case of failed states. What’s not to like?


Divide to conquer! As always.

So expect from now on all sorts of made-in-the-shade moves by Israel to advance the Balkanization of Iraq into a Sunni state, a Shiite state and an Iraqi Kurdistan.
.
Yet the whole saga is also overloaded with myth – such as the supposedly irreconcilable gulf between Arabs and Kurds in Iraq. For nearly 10 years there has not been a single credible poll stating that the majority of Iraqi Kurds want independence.
The Kurdish question has become increasingly explosive as the Empire of Chaos preferred Divide and Rule strategy of pitting Sunnis against Shi’ites

What’s certain is that wishful thinking – from Tel Aviv to Washington – will keep permeating calculations about the Kurdish question, as in assuming Turkey will be allowed accession to the EU (it won’t) and thus Kurdistan will be the EU’s de facto eastern border. Bordering what? A Sunnistan across the Levant? Over the Pentagon’s collective dead body, of course.

What Big Oil in the US – and also Israel – sees, most of all, is the mirage of a Western-friendly major oil exporter in the long run. That’s why Balkanization sounds so juicy. This has nothing to do with the welfare of the historically wronged Kurdish people. It’s hardcore business. And yet another Divide and Rule power play. Expect plenty of hardcore moves ahead.

The Chemical Manipulation Of Humanity: Brain Damage With Your Fries- Cooking Oil (Soy) and Neurological Changes