NATO Bows Out on Turkey. Turkey and Article 4

Long term readers here know I've put forth a line of thought last year that envisions Turkey being destabilized. Made vastly smaller. Vastly smaller.
Some time last year I begin to wonder about all those NATO backed destabilizers piled up at Turkey's southern border and began to understand how they would be turned on Turkey. I failed to consider NATO's destabilizers on Turkey's northern border, initially. But soon enough it dawned on me that the PKK, as a "Stay behind Army" would inevitably become a player in this destabilization.

Yes, I have mentioned on several occasions in multiple posts that, in my opinion, the  PKK is a functioning Stay Behind Army backed by NATO. I have gone so far as to talk this point up elsewhere too. Surely I can't be the sole person who realizes the connection?

With that background in mind consider the latest news which by all appearances  suggests that NATO is leaving Turkey to fend for itself- Come what may.. This falling out was alluded to in yesterday's post:

"Although public statements from the NATO meeting stressed unity, the official said members also urged Turkey to continue peace efforts with representatives of the Kurdish minority.

12:40 p.m.
Turkey's NATO partners say they stand "in strong solidarity" with the nation, and that the security of the U.S.-led alliance is "indivisible."

Indivisible, eh? Well I guess that depends on who wants the division?

There is NO unity- Turkey and NATO are divisible. When I read the article that will be linked below it seemed quite clear that Turkey is on it's own. 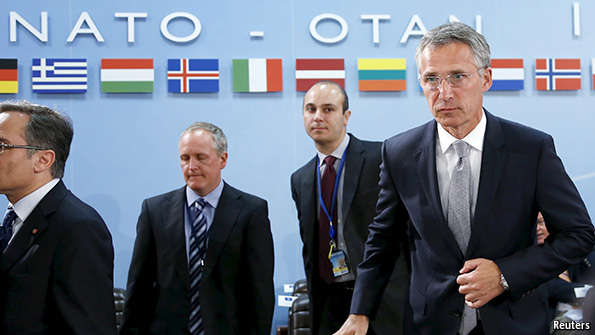 As usual the interesting bits will be highlighted and or underlined


ON TUESDAY representatives of each of NATO's 28 member states gathered at the organisation's headquarters in Brussels, at Turkey's behest, to address the security threats that country faces related to the Syrian civil war. Turkey says it wants its allies' support in combating recent attacks by the jihadists of Islamic State (IS) and by Kurdish militants. Its NATO allies are happy to support its fight against IS, but the battle against the Kurds is more complicated. NATO member states were forced to attend the meeting after Turkey invoked the North Atlantic Treaty's Article Four.


What is Article 4 and why is it important to a NATO state such as Turkey?


Article Four is less well-known. It says the member states will "consult together whenever, in the opinion of any of them, the territorial integrity, political independence or security" of any member is threatened. In other words, any NATO member can call for a meeting regarding a threat to itself or any other member.

Article Four has been very seldom invoked; based on a British parliamentary document, this appears to be only the fifth such consultation since NATO was founded in 1949. (A NATO historian confirmed that Article Four consultations are extremely rare, but was unable to produce an exact figure.)

The Economist goes to lengths to make the point that Article 4 is rarely evoked, except for


*The first time it was called upon was in 2003, when Turkey invoked it to ask the allies for protection (around the time of the US invasion of Iraq)

Turkey seems to be the only country that has ever used it, and may be developing a bit of a habit

Back that train up! First we have Article 4 being "rarely evoked" and then immediately after making that claim the writer @ the Economist tells us Poland & Lithuania requested an Article Four consult. Only to contradict their initial claims to tell the reader that Turkey 'seems to be the only country to have used it, habitually! What!?  Liar, liar?
Or are we reading a bit of demonization towards Turkey?
Some good old perception management, perhaps?

Why is Turkey so keen on Article Four?


Turkey has always worried that other members of the NATO alliance do not take its security considerations seriously enough. Turkey has been a member since 1952, yet America has tended to see it more as a crucial strategic asset, first against the Soviet Union and later in conflicts in the Middle East, rather than as a full-fledged partner. When Turkey invoked Article Four in 2003, it was worried that the invasion of Iraq was threatening its own borders in ways that would be overlooked by the rest of NATO

In plain talk Turkish leaders know that NATO doesn't really concern itself with Turkey's security unless it benefits NATO to share in that concern. The 2003 invocation had everything to do with.. you guessed it- the Kurds and their aspirations- I did a post on this way, way back.

What is Turkey asking for now?


In the past two weeks, the fighting in Syria has spilled over into Turkey itself. First, an IS suicide bomber struck the border town of Suruc, killing 32 people, most of them volunteers planning to cross the border to provide aid to the Kurdish town of Kobane. Then militants from the Kurdistan Workers' Party (PKK), who have been fighting an on-and-off guerrilla war against the Turkish government for decades, violated a two-year-old cease-fire by killing several policemen. Turkey responded with air strikes, first against IS and then against PKK camps in northern Iraq. (The PKK retaliated in turn, with a car-bomb attack on a Turkish military convoy.)

Turkey wants NATO to express support for its efforts to combat both IS and the PKK. But while NATO is pleased with Turkey's newfound eagerness to fight IS, it is hesitant about Turkey's aims towards the Kurds. America has a strong relationship with the Kurdish regional government in northern Iraq and an increasingly strong one with another Kurdish militia in Syria, the People’s Defence Units (YPG), which battles IS. The YPG is closely allied with the PKK.

And the PKK is a designated terror group- aka NATO left behind army, purposed with keeping Turkey off balance, always.

Did Turkey get what it wanted out of the Article Four consultation?


Partly. In a statement, the NATO partners said they "strongly condemn the terrorist attacks against Turkey", and affirmed that "the security of the Alliance is indivisible". They placed their support for Turkey in the context of the international struggle against terrorism. America and other NATO allies consider both IS and the PKK to be terrorist organisations. But while the NATO statement specifically offers condolences to the families of the victims in Suruc, where IS staged its attack, it goes on to mention only "other attacks against police and military officers" rather than referring more clearly to the PKK's attacks.

So, you see NATO offered condolences for the victims of the ISIS suicide bombing, but, for PKK victims condolences were given without mentioning their deaths were at the hand of the PKK. Why? Are some victims more 'worthy' then others? Is the political agenda made clear in who we should feel sad for vs who we should not feel sad for?


And it (NATO) does not offer support for any particular actions undertaken by Turkey in response. Invoking Article Four has reminded everyone that Turkey is a NATO ally, but if Turkey wanted NATO's imprimatur for its war against the PKK, it does not seem to have got it.


So, Turkey is a NATO ally, when it suits NATO and when it doesn't NATO doesn't give a hoot about Turkey's politically incorrect dead or the victims of NATO's own covert terror ops
NATO's response or lack of one says it all- NATO has bowed out on Turkey
What happens next?


Lion Cubs of the caliphate? Who is really recruiting children?