The Kurdi Psyop Perpetrated on Canada & Almost Everyone Else

The Kurdi drama continues, globally. But it's worse here in Canada because Tima Kurdi lives in British Columbia and the rest of the Kurdi clan has just arrived

If you are at all unfamiliar with the origins of this psychological operation read below:
Boy on Beach Narrative Riddled with Inconsistencies
Tima Kurdi, who resides here in Canada, is a proven liar. She lied when claiming she made application for boy on a beach and his family. She didn’t. She made application for the claimed uncle of boy on a beach. But not for boy on the beach or his family.

Only when Tima was confronted with the denial of any refugee application, made on behalf of Abdullah Kurdi, by Citizenship and Immigration Canada, did Tima admit she did not make any application for boy on the beach or his family

"Tima Kurdi confirmed her family had only made an official request for Mohammed Kurdi, explaining she and her husband could only afford to sponsor one brother"

The alleged father of ‘boy on a beach’ was the smuggler making Abdullah Kurdi  responsible for the deaths of his own family. - period.

An Iraqi woman identified him as the smuggler. An Iraqi woman who lost her children as Abdullah Kurdi drove the boat while engaged in human smuggling

tal September 11, 2015 at 10:03 AM
Down the Rabbit hole -- now Abdullah Kurdi is accused of being the people-smuggling-boat-driver Ms Abbas said the man she paid to book her passage told her it would be safe because the driver was taking his wife and two children.

'When I lost my kids, I lost my life, how can he lie to the media?' her cousin Ms Tahseen said, translating for Ms Abbas”

Abdullah Kurdi :'I know there was an Iraqi family on the boat and two children had died - a boy and a girl. I don't know why Zainab is saying that”


Mr Kurdi can't figure out why Zainab is saying that? Really? Let me help. She is saying this because her children are dead and she wants the world to know  that Mr Kurdi was the smuggler and not some innocent victim/heroic survivor of circumstance as is commonly portrayed by the lying media.

This whole psyop rests on Mr Kurdi and boy on a beach being victims. He has the most to lose should the truth come out- As does Tima Kurdi, the already proven liar. As I've noted previously this whole narrative relies on the Kurdi family to bolster it. Tima being the key propogator of the lie.

You may ask why am I rehashing this?

The media here is promoting this arrival in an over the top fashion and CBC is as usual censoring comments- In order to control the narrative The arrival was staged. By that I mean it was carefully crafted for proper media presentation.

Tima Kurdi: "Thank you to the Canadian people," she told a crowd of reporters gathered around the family. "Thank you to Prime Minister Trudeau for opening the door and showing the world how everyone should welcome refugees and save lives."


The Kurdi family was waving Canadian flags and chanting “Thank You Canada” as they arrived for their photo ops.

The family waved Canadian flags and chanted in English:


“Speaking through his sister, who translated from Arabic, Mohammad Kurdi also thanked Canadians and their government for making his dreams come true”

Yet, they could all chant "Thank You Canada" in English and wave their little paper Canadian flags- what a nice touch for the gullible dupes in Canada- warm fuzzies and all that.


Check this picture out?: 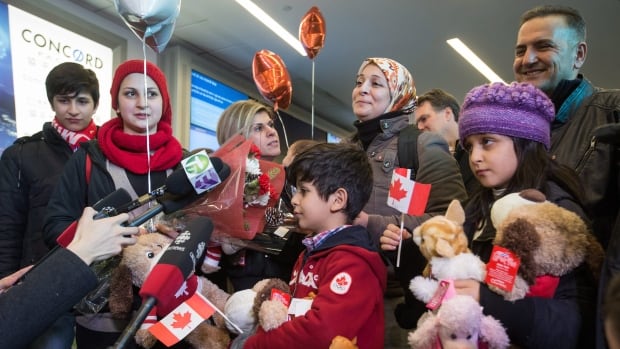 Notice the red scarf starting to the left? Red and white crossing the entire image. Boy with red scarf. Red toque & scarf.  Red Hoodie with Canada emblazoned on the front. Courtesy of Roots, perhaps? All the children wearing or carrying some red and white, along with the flags, at the forefront of the picture?  Everything placed for maximum manipulative effect.

I left a few comments yesterday at CBC pointing out that this was obviously staged for maximum heart tugs and maximum spin- After 45 likes CBC made my comment disappear.
In fact CBC disabled three of my five comments regarding this stage craft. Because in Canada, as elsewhere, the stagecraft is necessary to sell the lies. Always

And were supposed to get the warm fuzzies because the family was handed flags and told to chant 'canada' for the cameras- what PR company figured that stunt would appeal to the masses? A failed PR campaign

CBC- Censoring Because they Can
Posted by Penny at 11:57 AM