These 3 news items go together &  they both connect back to two previous posts: 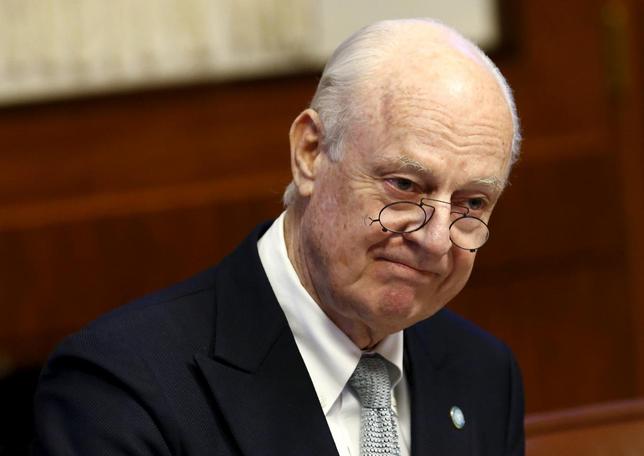 Staffan de Mistura, in an interview on CNN from the Swiss resort of Davos, said he would know on Sunday whether the negotiations could start the next day, but added that they had to be "serious talks about peace" linked to "concrete demonstrations" such as ceasefires and aid convoys.
"I believe we can start talks, perhaps not on the 25th (of January), but we need to maintain the pressure and the momentum" he said.

These talks were not going to happen for many reasons- I'll cover that in one of the two more extensive posts still to be published. Hint: The Saudi executions were a definite factor .
Undertaken to benefit the NATO destabilization.

The NATO :allies are definitely upping the ante. Undoubtedly

U.S. Defense Secretary Ash Carter won agreement Wednesday from defense ministers from France and five other nations to intensify the campaign against Islamic State militants in Iraq and Syria.

Truth- NATO is increasing the war against Iraq and Syria ,to create Kurdistan, aka 2nd Israel aka NATO's newest terror state


Carter said at a news conference with French Defense Minister Jean-Yves Le Drian that there was broad agreement on a coordinated plan to battle IS over the next year and retake key cities under the militants' control.


Carter also said the main 26 nations in the anti-IS coalition, as well as Iraq, will assemble in Brussels next month, after a NATO defense ministers' meeting, to continue the talk.

Carter urged the coalition to seize the opportunity now to hasten the terrorist group's defeat.

The U.S. has mapped out a coordinated campaign against IS over the next year, and Carter laid out the plans to the ministers during meeting hosted with France.

Truth: The proxy IS has to be dealt with from a perception managing point of view- The masses need to believe it is being fought successfully so the new Sykes Picot can emerge- With different signatory names of course.

"Because Daesh is retreating and we have managed to affect its resources in the ground, it is the moment to increase our collective forces with a coherent military strategy," Le Drian said

Truth: We can't allow Russian and Iran to aid Syria in taking back it's territory

According to a senior defense official, there were no specific offers from the ministers. Instead, a consensus emerged that they were open to doing more.


Truth: The US will be fighting this oneas it has all along, mostly solo,  save for it's bestie: Israel.  Yup, Israel- the other major player in all of this.

The defense ministers also discussed plans to retake two major cities in Iraq and Syria that serve as power centers for IS. The coalition wants to help Iraqi and Kurdish peshmerga forces regain control of Mosul in northern Iraq and to assist the Syrian moderate forces in ousting Islamic State militants from Raqqa, Syria, the group's self-proclaimed capital.

Truth: The PKK (Sunnis) and the Sunni (Arab) militias will be fighting alongside the USA and Israel

"We must openly call for the establishment of a Kurdish state that separates Iran from Turkey, one which will be friendly towards Israel," Shaked told a conference in Tel Aviv on Tuesday, according to a Times of Israel report.
Her call reflects a growing desire in Israel to foster robust relations with the Kurdish community in Iraq and even promote the process of founding an independent state by the Kurdish people.

How long have I written about Israel/Kurdistan/2nd Israel at the blog?

" release his documentary until 2017"