Hopefully readers here read the news regarding the closure of the established people moving aka ethnic cleanser operators/operations in Greece?  I'm certain readers here would not believe that news indicated the end of the ethnic cleansing of the Middle East and Africa resulting in the weakening destruction of Europe?


“This is yet another blow to the EU, after the UNHCR refused to get involved in the refugee returns organised by the bloc under its recent deal with Turkey, claiming that the hotspots in the Greek islands, where refugees are processed, have become prisons.

At approximately the same time, the Doctors Without Borders and Doctors of the World NGOs decided to abandon the Idomeni area, on Greece’s northern border, for security reasons”


In plain talk: The United Nations and the NGO’s choose,  by simply refusing,  to get involved with the right of return of ethnically cleansed persons, under the deal made with Turkey.
This has nothing to do with Turkey not abiding by the agreement. Rather the UN, which is the shiny happy face of NATO, simply ignored the agreement made and the compliant No Good Operations went along with the plan!

The people moving operation shipped out to the next base of operations in order to continue the free flow of ethnically cleansed persons into Europe. That new base is Italy. Yup! 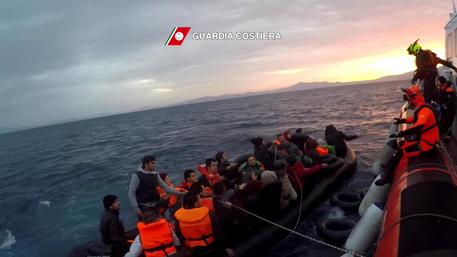 Base of operations was transferred to Italy:


Italy is in the front line in the refugee crisis and has saved hundreds of thousands of lives in the Mediterranean, 3,700 in the last five days alone, Foreign Minister Paolo Gentiloni said Wednesday at the UN's High-Level Conference on Syrian refugees. Addressing the one-day conference in Geneva, Gentiloni illustrated Italy's initiative of humanitarian corridors, "which can be an initiative that can be emulated by other countries". As for Syrian refugees in particular, Gentiloni said Italy had agreed to take 1,500 more people by the end of 2017 within the framework of the ongoing EU-funded reception programme, as well as facilitating visas for families to reunite. The EU has agreed a 'one in, one out' programme with Turkey to return new Syrian arrivals from Greece, with Ankara taking back one economic migrant for every refugee whose asylum claim is recognised.

UN Secretary General Ban Ki-moon told the Geneva conference more needs to be done to provide resettlement and other answers for their plight. "We are here to address the biggest refugee and displacement crisis of our time...This demands an exponential increase in global solidarity," he told the gathering at the Palais des Nations in Geneva, attended by the representatives of 92 countries together with governmental and nongovernmental organizations.

Some 4.8 million Syrians have been forced to flee across borders by five years of war, while another 6.6 million are internally displaced. While talks are underway to find lasting peace, the UN chief said more countries need to step up and provide solutions for Syrian refugees.

Italy is more accessible to the mostly North African population being cleansed from their nations..

To the anonymous commenter- you were right on the money when you suggested this was the next move- shortly after your comment I saw a handy dandy map of the new route to transfer the ethnically cleansed into Europe- Right through the center of Italy and straight towards Switzerland.

Don’t think so?- Italy New Humanitarian Corridors
Of course this story is obfuscated with the use of  the  "saving children" manipulation


She said the “experimental humanitarian corridor,” based on a sponsorship system, could be extended to the rest of Europe if successful. It will be presented to European Migration Commissioner Dimitris Avramopoulos next month.

“It’s something not only Italy but Europe really needs at the moment, to bring refugees here safely and also guarantee the safety of host countries,”

She is out of her mind! Is that what Europe really needs at the moment- To aid and abet the ethnic cleansing of an geographic area of the globe and have their own nations overwhelmed? Really, that's what Europe needs?????

For my readers in Italy.

I put this through translate, so I hope it is concise enough for you to understand

To my extended family in Italy- My brothers and sisters. The history of Italy. Her culture. Her people. Are all worth holding onto. Please do what you can to save the nation of my ancestors.
Hold onto your language. Your history. Be proud of this heritage. Perhaps I look too romantically at it all, but, the stories of my Grandparents and the life they had in Italy with all their children.... Until the war came. Beautiful. So beautiful. My father tells them with such pride. It truly appears the elite classes are intentionally working to destroy your culture, heritage and your nation. Hold on to them, they are worth saving. I look forward to one day visiting the country, culture and history, of a nation, that contributed to the entirety of the person I am today-