Because their exploitation became public. Notley`s saving face- though she`s an obvious liar
And I`ve nothing good to say about the NGO that brought them here- for profit!

When I first read the news of the South African fire fighters brought into Fort McMurray to help fight the fire- it was OBVIOUS to me and should have been OBVIOUS to everyone that Alberta's government had intentionally brought in foreign workers- Displacing Canadians who could easily do this work, with training. And there was time to train people to undertake  this firefighting.

CBC a couple of weeks back: 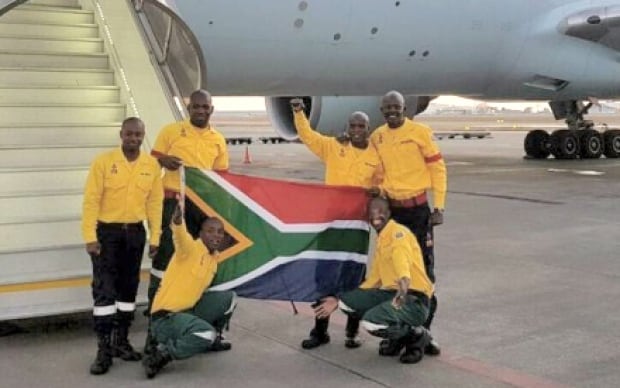 The first thing the 281 South African firefighters did when they touched down in Edmonton was sing.

They sang soldier songs — songs of South Africa — while the large crowd gathered there to welcome them cheered.

A man who worked in Anzac, a town once evacuated by the fire, personally thanked each one as they walked through the arrival gates.

"Welcome to Canada, thank you so much," he said, in his other hand he held a Canadian flag tied to a hockey stick.


Yup, they put on a show! Bread and Circuses for the dupes in Canada

What a sly way to bring in foreign workers! With a song and a dance and of course some Canadians are taken by the show, while thankfully others are not!- Thankfully


We can't have any truth round these parts.

Imagine my absolute non surprise to read this latest news!:  South African company apologizes over firefighter pay dispute in Alberta
Rachel Notley, an NDP'r  is showing that the NDP is a scuzzy as all the rest- (Not a surprise)


A South African company that brought a crew of 300 people to Alberta to help fight the Fort McMurray wildfire says it is sorry about an ongoing dispute over their pay.

Working on Fire Ltd. posted a message on its website Friday saying it is extremely disappointed the dispute wasn’t resolved internally before it escalated into an international incident.

Alberta Premier Rachel Notley has said the province contracted with the company to pay the firefighters roughly $170 per day.

But a member of the crew says they were being paid about $50 per day for fighting the fire in 12-hour shifts.

Can you say exploiting foreign workers- And Rachel Notley knew dam well this was exactly what was going on!  She may have contracted with the company to pay a certain rate per day, however, she had to have known the firefighters were not going to make that amount- Cripes, even I knew that!


Working on Fire says it never agreed to pay anyone that amount and the workers are leaving for home because of the dispute.

Notley has said her NDP government will ensure that every firefighter from South Africa is paid according to Alberta law, which stipulates a minimum wage of $11.20 per hour.

The company said it is treating the pay dispute with the utmost importance and is committed to finding an amicable solution.

Notley is saving face. She is a liar- That's my opinion.
Working onFire, another No Good Organization is simply exploiting young men , in this global gulag created by the banks and multinationals
Plenty of unemployed Canadians can do that work- Including some who are out of work from the oil industry in Alberta.
If you keep yourself entertrained by the bread and circuses it's all you're ever going to get!


From yesterday- looking for some thoughtful comments:


Darwinism and its Mongoloid Mutations Refuted