Mosul, Iraq and it’s Liberation. Definitely in Coordination with Moves In Raqqa, Syria 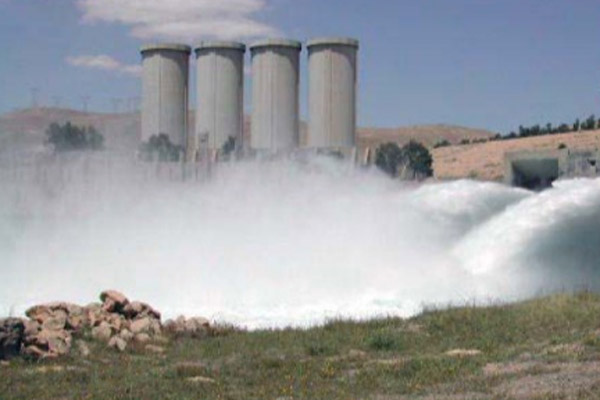 Aecom, a global provider of professional technical and management support services, has been awarded a $52.8 million contract to repair the bottom outlet of the Mosul Dam, Iraq.

As per the firm-fixed-price contract, the architectural and engineering services will be completed by the end of November.

Bids were solicited via the Internet with one received, according to a statement from the US Department of Defense.

Aecom: Bids were solicited by the US Dept. Of Defense via the Internet and ONE bid was received from Aecom

Just the facts from the Egyptian news article. The first paragraphs deal with the obfuscation surrounding the moves on Mosul. Will they? Won’t they? Etc.,  Then a rehash of the so called attack by ISIS on US forces which resulted in the death of an American soldier (Charles Keating) - entire narrative presented by a known propaganda con artist- Matthew VanDyke


“According to American reports, hundreds of Peshmergas fighters are being trained for the upcoming Mosul battle.”

Flashback: The US Push to Recapture/Annex Mosul- Fact over Fiction

An article included in the above post mentioned minimally 2200 Kurdish fighters being trained- that one thousand times 2 plus some more.

“Other reports have spoken about thousands of Sunni Arab tribe members from Nineveh being trained for the battle, some of them led by Athil Nujaify, the former governor of the province. These men, called hashd watani (national volunteers), are being trained by Turkish troops, reports say”


By Turkish troops are we talkin' under the auspices of NATO?  Recall Turkey as a ‘split nation’ like Canada.  Canadian troops wearing Kurdish flags on their uniforms DO NOT fight in the interests of Canada the nation state.

Update to the Canadians wearing Kurdish flags on their uniforms: They may stop wearing them? Or not!

Although it is tradition to wear the patch of a military partner, the Kurds do not have a nation state.  Maj.-Gen. Mike Rouleau, commander of the special forces in Iraq, told CTV Chief Anchor Lisa LaFlamme that Canada is also rethinking the custom. “We'll re-examine that and we may well take them off too,” Rouleau said.
“Whether we have them on or off, it's not going to change anything about the level of commitment and closeness that we have with the people who we're sent there to support,” he added.

Because NATO Canada is very committed to destroying Iraq, remaking the middle east  , to the benefit of Israel and multinational corporations and banks.  NATO Canada's military shenanigans have zero to do with my home nation of Canada- It's not improving the quality of life here. It's not making us more free.  It's  not creating jobs. It's sucking resources, taxes  and creating future indebtedness etc to fight wars of choice for other persons.  Not beneficial to non NATO Canada. So Turkish troops training fighters in Iraq? NATO's Turkish troops? I don't know!

Continuing with a direct statement from Egyptian news article

“The United States does not want the credit for the Nineveh liberation to go to either the Arabs or the Kurds, so it prefers the liberation to be through the action of joint forces,” said Hashim Al-Hashimi, an expert on IS.

“However, the US knows that there are difficulties in putting the Nineveh Liberation Forces, the Peshmergas, the Nineveh volunteers and the hashd together, so Baghdad has surrendered to Washington and the hashd have not participated in the military operations.”

“The battles in southern Mosul will be limited until Washington reaches agreement with the rival forces that are using the campaign as a way to continue ethnic and sectarian clashes, an Iraqi expert told Al-Ahram Weekly on condition of anonymity”


The battles in southern Mosul will be limited until Washington reaches an agreement with rival forces???  Yet, we know the Kurdish forces are closing in from the north

“The ambiguous situation of the operations against Mosul have made many think they could be a trick to draw IS attention away from Fallujah in Anbar Province, which is also the target of a military campaign”


The ambiguous situation of operations against Mosul...??? It’s not ambiguous. The Kurdish militias are moving in from the North/East and the US is dropping bombs on Mosul. Likely bombing everything that stands. We know people are already fleeing.  According to this most recent news article nothing seems to be really happening south of the city of Mosul- So, how does one surround a city with no troops on the opposite side?
Notice: Should the Mosul dam “fail”... the Peshmerga forces are high and dry- And at a distance to the south we have Iraqi forces and Shia militia men

Abdel-Karim Khalaf-  He said that there are “real ground operations targeting a headquarters for the coming operations that need to make Makhmour, 50 km southeast of Mosul, where the Iraqi forces deployed last October, and its surrounding areas secure.”


So Iraqi forces (Shia militias and military)  are working to secure an area that is 50 kms southeast of Mosul.- Iraqi forces and shia militias are futher away from the city of Mosul then the Peshmerga fighters.. 
" The U.S. is devoting painstaking efforts to keeping Shia militias out of Mosul"


Back to the Egyptian News:


An Iraqi parliamentarian from the Reform Bloc said in a TV interview this week that the government has temporarily stopped the Mosul operations in response to an American demand that they take place after the US presidential elections.


Iraqi government to wait to move on Mosul until after the US elections???


Recall my suggestion that the move on Fallujah was intended to keep Baghdad occupied and away from Mosul?

“The important issue is that the US-led coalition air strikes cut the road between Mosul and Raqqa, where the battle has already begun against IS under American direction.”

Because the taking of Mosul and Raqqa really does seem to be a coordinated/ partnership
As mentioned here: Leafletting Mosul Ahead of Annexation Operations- Coordinating with Raqqa?


I've had so much info to post and have had little time to get to it. Until today!