Could this claim be true? Well,  it  can't be discounted that's for sure!
Additionally it reads as very plausible- Making it worth consideration.
Consider the news from yesterday that Putin is visiting Istanbul in October..


Hey Penny,
You should look into this entire "bloody october" scenario that the US apparently has planned for Turkey.


Henri Barkey, one of the coup plotters, has talked about it.
It involves ISIS attacking Turkey dressed up as the PKK. Many Turks on twitter are very worried about it.

Took it upon myself to do some searching..

Wouldn’t know where to begin to find this on twitter, being a non savvy twitter user.
If anyone point me in the right direction...... I’ll take the assistance!
Did manage to find this article, which seems to generally fit the bloody October scenario Rescue mentioned. 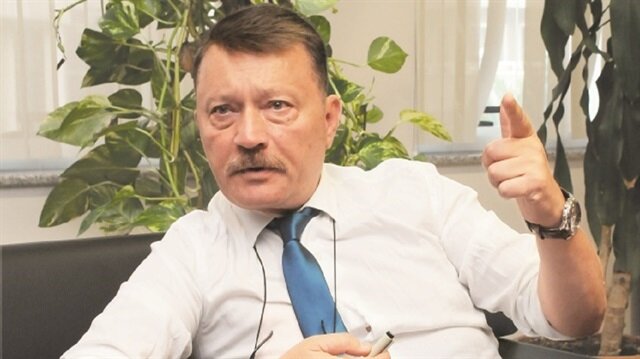 The second coup in Turkey is coming before November, ex-military officer warns


A second coup attempt in Turkey is going to happen very soon and it will be bloodier than the previous one, a retired military officer said on Saturday.

“Be prepared against the second attempt. And it's going to happen very soon. This is very certain information,” the veteran said.

On July 15, Turkey foiled a deadly coup attempt organized by the Gülenist Terror Group (FETÖ) that left 241 people dead about 2,200 others injured.

The attempt was the deadliest in the history of the Republic of Turkish. The U.S., CIA and FBI were accused of being behind the coup that aimed to topple the democratically elected government and to kill President Recep Tayyip Erdogan.

The U.S. has been hosting FETÖ leader Fethullah Gülen, the mastermind of the coup attempt, and is still providing all support despite Turkey's legal demand for his extradition and detention.

Col. Ugur warned that the second attempt could be more dangerous than the previous one. “We are all in a euphoria of victory. But I am warning Turkey.”
The threat is not over

“No one should think 'Ok, it's over. Turkey is on track now. The U.S. cannot do anything. FETÖ cannot attack anymore, the PKK cannot do anything more, we have broken the back of these organizations.'”
The Kurdistan Workers' Party (PKK), recognized as a terrorist organization by Turkey, the EU and U.S., has been conducting an armed conflict in southeast Turkey for more than three decades, killing around 40,000 people.

Despite being listed as a terror group, the EU and U.S. continue to support PKK terrorists, providing them with arms and money, allowing terror sympathizers to organize propaganda rallies in the West.

The retired army officer said that there was a preparation for the new coup attempt.

He stated that the United Kingdom has been working on a huge uprising in southeastern Turkish provinces.

“As I was informed, the Britons have been meeting with all tribes in the southeast, especially Hakkari, Van, Çatak, Slopi and Mardin areas, for last two-and-a-half months.”

He said that the U.K. has paid all bank debts of these tribes that can be summed up as billions of Turkish lira.

“Negotiations are ongoing,” he said, adding that the U.K.'s consulate general is dealing the talks.

“What is the [U.K.] consulate doing with the tribes? The PKK terrorists allow their vehicles to pass the road into the southeast while they don't allow the other vehicles. Why?” he asked.

He cited a recent news published in several mainstream U.K. newspapers, including Daily Express and Daily Star, claiming that 10,000 British Naval infantry forces are on standby in Cyprus to enter Turkey in case of another military coup, under the pretext of evacuating British holidaymakers from Turkey.


The SAS, as well as the Special Forces Support Group (SFSG), are reportedly ready to deploy from RAF Akrotiri in Cyprus should the need arise.

In case you're wondering Akrotiri, Cyprus is British Territory in Cyprus


Akrotiri and Dhekelia (Greek: Ακρωτήρι και Δεκέλεια, Akrotiri kai Dekeleia, Turkish: Ağrotur ve Dikelya), officially the Sovereign Base Areas of Akrotiri and Dhekelia[1] (SBA; Greek: Περιοχές Κυρίαρχων Βάσεων Ακρωτηρίου και Δεκέλιας; Turkish: Egemen Üs Bölgeleri Ağrotur ve Dikelya), is a British Overseas Territory on the island of Cyprus. The areas, which include British military bases and installations, as well as other land, were retained by the British under the 1960 treaty of independence, signed by the United Kingdom, Greece, Turkey and representatives from the Greek and Turkish Cypriot communities, which granted independence to the Crown colony of Cyprus. The territory serves an important role as a station for signals intelligence and provides a vital strategic part of the United Kingdom communications gathering and monitoring network in the Mediterranean and the Middle East.

Back to the Coup Two Warning


The Daily Express reported that the missions would focus on areas popular with tourists and that troops would be cleared to use lethal force if the rescue operations were interfered. While Daily Star said, “If there is another coup attempt then civil war will follow. If that happens there will be a major international crisis.”

The veteran military officer drew attention to the reports saying that the U.K. is working on a chaos plan in Turkey. “And the main aim of the plan is the invasion of Turkey,” he added.

“There will be demonstrations in the southeast lead by the Peoples' Democratic Party (HDP), as they usually do. Undetected pro-FETÖ police and military officers will directly open fire at demonstrators. The incidents will kill between 15 to 20 people. This is certain information. The incidents will take place in Semdinli, Yüksekova and Kiziltepe.”

“If the tribes in southeastern provinces and districts, visited by the U.K. consulate office, rise the bait they would lead the people to the street,” he added.

“An in the western part of the country, some prominent public figures will be assassinated simultaneously either by the PKK or Daesh,” he said.

If they succeed to do this Turkey would find itself in a massive chaotic environment, he noted.

The UK is playing behind the door, not the US

“Everyone will revolt and the civil war, as they [the UK newspapers] described, will be launched.”

He warned that the main attack would be come from the U.K. while everybody is blaming the U.S.

“They bred FETÖ and the PKK for this attack.”

He said that unidentified FETÖ members in Turkey's security forces and intelligence agencies would be mobilized for the attempt.

The second attempt is coming before November


He warned that if no action is taken, the second coup could happen before November this year: “Non-national elements, the PKK, FETÖ, will all work together for the second attempt. All organizations that have been working under U.S. orders in the region, including even the Turkish military, police and bureaucrats, will attack simultaneously. The structure of the attack will not be same as the July 15 coup ... If we don't end this game, the second attempt will come before November.”