From the CIA document dump earlier this week: Online Now! 12 Million Pages of Declassifed CIA Documents I read all four documents Ynet is claiming demonstrate some imminent danger against Israel.
What is actually written there leaves one with the impression that Israel desired and planned for the war- despite the US asking them, more then once,  not to pre emptively strike other nations. And clearly reporting that Israel had begun to mobilize troops in advance of their desired war.
Considering all the recent Israeli aggression against Syria present day. The invasion of Lebanon. I find it impossible to believe that Israel was anything but the aggressor in this instance.

Despite the spin put on this news by Ynet

Intelligence briefing for Nixon on October 6, 1973 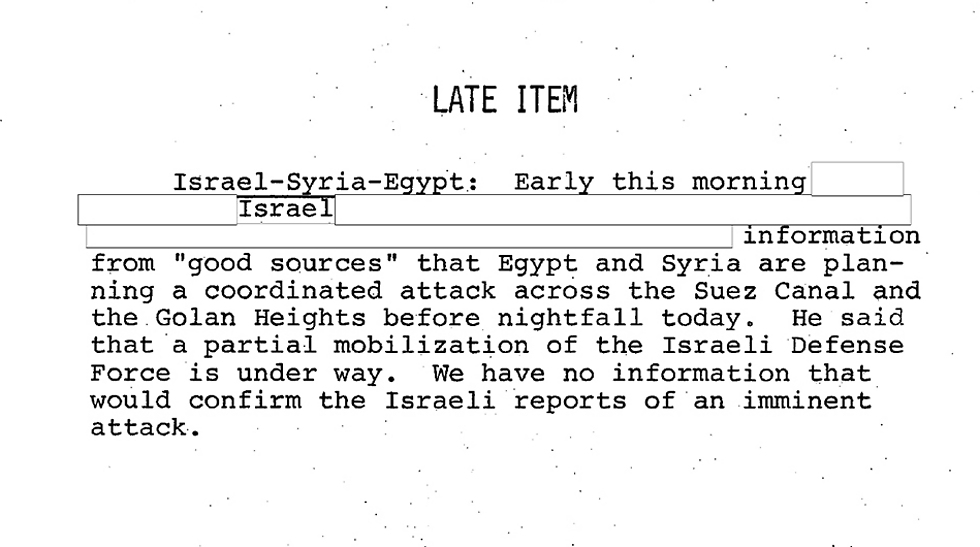 
The second document used by Ynet, again fails to demonstrate an attack is imminent against Israel- It may demonstrate that there was going to be an attack against Syria? If we should assume citizens of the Soviet Union were  actually being evacuated? Which is what this document does. "probably"?

The US asks Israel to exercise restraint
The US asks Israel to take no preemptive action
The US opposes preemptive action on the part of Israel
The fourth document tells us only about Israel's intelligence.
"I was notified that the Israeli's have what they consider to be hard information..."
"Urgently communicating with the Israelis, Warning them against any pre emptive attack"
And Egypt expected an Israeli provocation.. 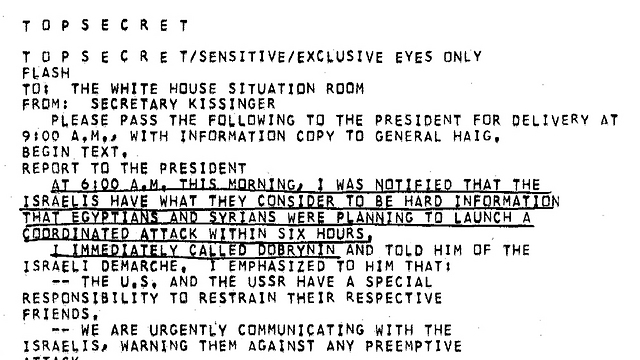 Reading all those documents for myself, suggests to me that Yom Kippur was a desired war, planned by the Israeli's against Egypt and Syria.

Not sure why Ynet is using these to bolster the official narrative?

Ynet:  The morning of the coordinated attack on Israel, US assessments flipped from presuming war was not on the horizon to frantic attempts to prevent Syria and Turkey from attacking the Jewish state, which was warned off any preemptive strike.

Read the documents and decide for yourself... In all four documents it is clear Israel has prepared for an aggressive move and the US is repeatedly calling for restraint. Warning Israel not to move preemptively. Egypt expecting an Israeli provocation..


Self-defense or provocation: Israel’s history of breaking ceasefires
Posted by Penny at 7:04 PM