The White Helmets must have played their "Trump" card! to get in to the US


a dependable and exemplary person

Is the oscar nomination for special effects? Cause the White Helmets cinematographer is attending!  Yup, they have a cinematographer!  What else could on have expected?
Cinematography = Special Effects= Fooling the audience
Here's a cinematographer who has made a series of brief video demonstrating the ease with which it's done  1st  &  2nd

White Helmets Get Visa to Travel to US for Oscar Psyop

The White Helmets going to the Oscars is perfect!- Their theatrics and production is pure Hollywood- So why not an Oscar nomination?


Two Syrian rescue workers said they plan to travel to next week's Oscar ceremony, where their documentary "The White Helmets" is nominated for an award, after weeks of uncertainty caused by US President Donald Trump's travel ban.

Raed Saleh, the leader of the White Helmets, and cinematographer Khaled Khatib have both obtained visas to travel to the US for the 26 February Academy Award ceremony in Los Angeles, producer Joanna Natasegara said.

"They both have valid visas. We remain cautious about the physical part of entering the country. Things had been very unclear until this point, but we are now being told they are welcome to enter," Natasegara said.


Yet another theatre like production - that made their fakery obvious 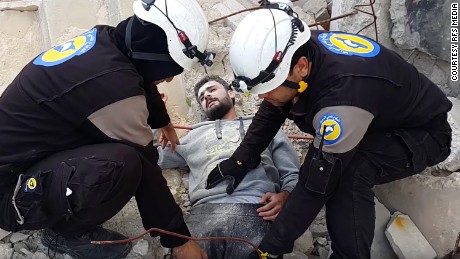 Have you noticed that since Aleppo was liberated from terrorists, terrorists shipped out,  there have been no more White Helmet "rescue" videos?

"You live in a world of illusion.

Where everything's peaches and cream

We all face a scarlet conclusion.

But we spend our time in a dream"


From Earlier: A little more illusion for us all to break free of