Have you all noticed as of late how much hatin' on hate is going on? As we condemn hate, we condone it, by hating. It's positively bipolar- extremes of emotion - The way we are informed to not hate while supporting the fight against it , usually involving oppressive stances. Or we insist upon having the state impose violence against alleged haters- If we hate, condemn and impose violence on  so called haters doesn't that make us hateful haters?  Digression: read the absurdities at the embedded link.

Curiously enough hubby and I were discussing a related topic just the other day. We we're talking about the human ability to discern friend from foe. Judge a threat. Quickly. Avoid being preyed upon by taking the necessary action. I fully believe this survival skill is an utterly necessary human trait.
In fact it's one that should be employed with more frequency by everyone.  Then this skill, which has obviously gotten weak, can be honed. (refined or made perfect) It seems quite obvious to me that since we haven't exercised this discernment, for various reasons mostly having to do with the many fallacious beliefs we've been indoctrinated with, we have lost that ability to quickly discern or assess precarious situations we  may find ourselves in. Our failure to employ this innate sense is the very reason we, individuals included in a group, are being preyed upon by those who have been vigilant in both employing this discernment and indoctrinating their prey, us, with those aforementioned fallacious beliefs.

Hate is but one tool in that skill set. One of many equally important tools

Putting value judgements on emotions is yet another contrived absurdity- Emotions are not good or bad. They are not positive or negative. Emotions just are. They exist.  You and I feel them. And that's it. Labels are placed on them so that you can be manipulated. (Science can't even define or explain what an emotion is) The labels, like the assigned values, are truly meaningless gibberish. You know when your angry. You know when your sad. Glad. Mad. Ecstatic. Concerned. Etc., And you know when you love. And you all know hate. None of these feelings or passions are necessarily bad or good on their own. How emotions are utilized or expressed is where the benefit or detriment of any emotion comes into play.

Hate is bad, except when encouraged by the State

Won't spend too much time on this. Pretty sure everyone here understands when the State wants to attack another nation, they use propaganda to encourage the citizens to hate those the State desires to attack. It's a topic that has been repeatedly covered here so just one small reminder

"The only good Jap is a Jap whose been dead six months. When we get to Tokyo ... we'll have a celebration where Tokyo was.


"They hate us for our freedoms"

Hate is really, really bad, when discouraged by the State

Here, in a part of the world commonly known as the west, Hate is presented as a societal negative. Unless the state is encouraging hate for war making (discussed above)

All  these inculcated beliefs are how a person is turned into a rug, to be walked upon or across.  The State loves a society of rug people they can walk all over. Are you a rug?

Borrowed the next little bit from here

Wish I'd caught on to the anti hate campaign sooner, myself.


"Those who create these social concepts have ulterior motives as they showcase hate as a consuming poison that must be eradicated.

Social control is the main force driving this anti-hate campaign. If you choose to control a society, for instance, then you need that society to be as complacent as possible. Hatred can lead to anger, and anger can lead to violent action, and violent action is the opposite of complacency. Thus, harboring the emotion of hatred becomes socially unacceptable and religiously immoral"

Hate as an impetus for change

Hate can be an impetus for change. That's why the elites and their lackies manipulate this vital emotion.With the help of the all pervasive perception managing media. That includes main stream media,  social media, movies and any other outlet of influence. The powers that shouldn't be inform us who to hate and who not to hate- Plus where, when and why to hate. Because the creation of hate serves them and their agenda for change. They thrive on that mass of energy.  But does that created 'hate' serve us? After all it's not our desire for change.

That said, our hate should serve us. Let me give an example here to clarify. We hate our present day circumstance. It's oppressive. Our governments don't work for us. We are becoming as a society more impoverished. And I'm not talkin' just finances. Pretty sure we can all agree with that contention.
This should be an impetus for change. And yet it isn't. I've seen no real push for change. We still participate in our own oppression. We carry our personal tracking devices around 24/7. We fail to be aware of our circumstances and our surroundings making us easy prey. In more ways then one. We make enemies of those we should find common ground with. And, we completely fail to recognize the parties actually causing us harm. All due to the fact we have failed to properly employ our  personal hate. In other words by choosing to devalue & avoid our hate emotion we have opened ourselves up to abuse while simultaneously weakening our ability to survive and thrive.


"The ability to quickly separate friend from foe is an essential survival strategy. This primitive skill forms the basis of hate. Because mistaking an enemy for a friend can be deadly, mental processes are biased toward doubt, caution, mistrust, and dismissal in evaluating others"

We have mistaken enemies as friends for far too long now.

Channeling the Energy of Hate

I believe hate used judiciously can improve many an intolerable situation. The powers that shouldn't be obviously feel the same. Because they manipulate hate to their advantage and our disadvantage.    Rather then mindlessly following the leads presented, we all need to be mindful of why's of hating.
Hate often arises out of conflict or a sense of impending harm. Who has truly been causing you harm? Who has been really causing conflict?  Change that which is within your control to change. And much more of it is within your control then you have been led to believe.

Own your hate. Direct your hate. It's your emotion to engage with.  When you feel hate don't employ it in away that will cause your own life to worsen or become more difficult.  Instead channel it in a constructive fashion. Channel it towards change.

If we begin to view hate appropriately as a necessity for survival and exercising it as a corrective remedy, rather then viewing it as a negative or a force only for destruction, we will certainly be living more honest engaged and self aware lives. Eventually know satisfaction & personal peace. 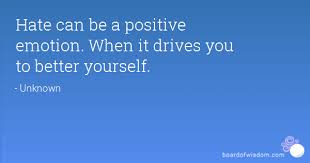