The Big Project: Humpty Dumpty, Israel and the "cool people"

I managed to listen to this entirely. You can too, or not, depending on how much guileful talk you can take..

RescueSeptember 12, 2017 at 12:02 AM
Here is a link for the full presentation, it is at the Washington Institute for Near Eastern Policy: https://www.youtube.com/embed/CL3j9HFmal8


For this post my focus is on what was stated around the 69 minute mark:
Link

Major General Yair Golan ; he likes the idea of an independent Kurdistan because he likes the "cool people" He claims that an independent Kurdistan is good for the "region"- Which of course means it's good for Israel. He says Israel and the Kurds aka the"cool people" have a good relationship. And he states the PKK is not a terror group- You can hear all this for yourself. It's nothing new for anyone who has read here for the past several years. I had to laugh when he said the Kurds are "moderate" in nature... yah, tell that to all those who have been murdered, displaced, beaten had their property stolen.. by those "cool people"

That video is embedded below:

Douglas Feith- remember him and think of 9/11. Who really benefited from 9/11?


Of course one should ask if poor Humpty had some 'help' when he fell off that wall? 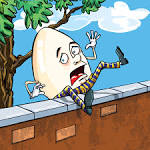 We know with certainty Syria's 'fall' had helping hands aplenty!

"However, he did say that he thought that those who were stuck with the idea of maintaining Syria’s borders as they were set by colonial European powers after World War I were making a mistake.

“Rather than being locked into a decision that happened to be reflecting key ideas that [British prime minister] Lloyd George had in mind in 1920, we should be thinking more broadly,” he said.

The ex-Pentagon official( Douglas Feith) asked rhetorically: “What is the situation? What changes are in order…would make the region happier, freer, more prosperous, more peaceful going forward?" He suggested leaders ''break out'' of the idea that the borders should remain exactly as they were before the war.

“Whether Syria can hang together as a state is a serious question. People should not be focused on…that humpty dumpty has to be put back together again,” he said.

Of course he wouldn't speak in such a manner if Israel was the humpty dumpty would he?

The "big project" relates directly to the investigation covered in my extensive post of a few days ago- I really thought the 2.2 billion dollar plus arms pipeline would have seen broader coverage especially in the so called alternative media- But no- I haven't seen too much about it, in either of the 5 eyes media (alt or mainstream)

"Weapons continue to pour into Syria to fight ISIS, and fears are growing about what will happen to the arms and fighters when the jihadists are defeated.

Wilcken said that he feared for the future of the Middle East.

“Given the very complex, fluid situation in Syria … and the existence of many armed groups accused of serious abuses,” he said. “It is difficult to see how the US could ensure arms sent to the region would not be misused.”

“Given the very complex, fluid situation in Syria … and the existence of many armed groups accused of serious abuses,” he said. “It is difficult to see how the US could ensure arms sent to the region would not be misused.”

Assuming the US wants to keep track of these weapons and ensure they would not be misused?
I would say that's a very foolish assumption!


Big projects take time. We've been witnessing nearly 2 decades of discord in this region, with added momentum to destabilize and redraw borders, under cover of the 'arab spring'
How many years have I written about this remake? Which does include Turkey.

The Big Project is Turkey


This situation is not limited to the change of political maps alone. The ethnic map is being changed, an intervention is being applied in this direction; the centuries-old identity of cities is being changed. Because this map also covers areas where there is no presence of the Kurdish ethnic identity and is being shaped entirely in accordance with the U.S. and Israel’s security interests, their future calculations and plans to control the region.

That area, that zone is being torn away from our region.

We are in the eve of the most radical change after Sykes-Picot. Yes, the Sykes-Picot era is over. Yes, a lot is going to change. However, with this project, with these changes, the region is being entirely torn away from its dynamics, Mesopotamia and Turkey’s south are being turned into a European internal affair.

The operation in the north of Syria and Iraq is going to be the primary example of the “new geography” which borders are being drawn entirely by Atlantic countries; after this step, history will progress differently. The region’s disintegration, its division, its partitioning into garrison states, the elimination of all structures resisting this, the downsizing of strong states will gain pace following the formation of this map.


Were the investigations increasing their pressure in the U.S. to pressurize Turkey while all this was happening in our south? The Dec. 17 and Dec. 25, 2013 files and the July 15, 2016 bloody attacks were to stop Turkey from rising once again, to break its regional influence, confine it to Anatolia and downsize it there – we know this now. The operation continues full speed ahead. At this stage, we are watching the stages of this major intervention in the north of Syria and Iraq. But just like Dec. 17, just like July 15, this operation is also being carried out with internal partners. Those who failed to stop Turkey through the Fetullah Terrorist Organization (FETÖ) are testing another scenario internally and from the south.
Don’t forget, the biggest project is to bring the most powerful country that got back up on its feet a century later to its knees. Hence, all the maps drawn today are targeting the map of Turkey.

As the region is remade in plain sight.... Stating anything else is just obfuscation to give cover/hide the ongoing project.

An extremely minimal selection of the 100's of posts covering the remake of the region in real time.

While others obfuscate, I call it as I see it!

A New Strategy for Iraq and Syria ????

It’s time to rethink Iraq and Syria. It begins by admitting that the old borders are gone, that a unified Syria or Iraq will never be reconstituted, that the Sykes-Picot map is defunct.

Fully occupied & annexed Northern Syria (US special forces & PKK/YPG, aka the cool guys, militia)  sure looks to be  the force behind NATO's new southern flank- The one I wrote about nearly three full years ago..