Wind Power Weaked by AGW?! So Many Bats & Birds Killed for A Green Hoax

All those dead birds and bats.. Year after year.
As those massive ugly wind turbines march across the skyline alongside grotesque transmission towers.  How much tax payer money/debt has gone to wind “power”

Apparently the green carbon cult missed the boat on this one? Or not? Since they enriched themselves a great deal along the way From bankers, through "scientists" to carbon traders- big oil- wind subsidies etc., Every one connected to the cult made money and people like you and I are vastly poorer for it.   If only the green carbon cult would go the way of the alleged endangered polar bear?

Where to begin? Let's talk polar bears first.. the recent carbon cult psyop has me burned up.

Polar bears in two High Arctic populations seem to be doing better than scientists had thought.
The first major study of the Baffin Bay and Kane Basin populations in about 20 years has found more bears than population models predicted.

The study updates the last report into the two populations done in 1997. Since that time, scientists have used population models to predict the health of the two groups.
Both were considered to be in decline. The Baffin Bay bears were thought to have decreased to about 1,600 from 2,173 two decades ago.

Those models seem to have been too pessimistic, partly because the earlier population survey was an underestimate. The new report says there are 2,826 bears in the Baffin region.

Let's read those facts, again- Computers models said Baffin Bay Bears would decrease from 2173 to about 1600. Real world numbers? 2,826 Bears. That is an increase of nearly 700 bears from the initial 2173 count-  It's also 1,226 bears more then the estimated decrease count


The report has better news on the Kane Basin numbers. "(There's) relatively strong evidence for stable to increasing population."
The report counts 357 bears in that area, up from 224.


I'm not getting all excited about claims regarding conditions of the bears- First of all, I can't verify the claimed conditions of the bears. More importantly because some years are good and some years are bad for wild animals- I'd expect the bears would be leaner some of the time and more robust other times. An overall increase in the population indicates a clear ability for the animals to thrive!  Keep in mind the dire warnings of the carbon cult- imminent demise/extinction? Wrong, as usual.


"Shockingly high" numbers of bird and bat deaths caused by one of Canada's biggest wind farms should serve as a warning to planners of other projects that may be built in crucial wildlife zones, one of the country's key conservation groups says.
The 86 huge turbines on Wolfe Island, just outside Kingston, Ont., began to produce power about a year ago, and an on-going count of bird and bats that have been killed by the blades has been conducted since then.
A consultant's report covering the period between July and December of 2009 was released recently, indicating that 602 birds and 1,270 bats were killed by the turbines over that stretch. While the report says the numbers of dead birds and bats are similar to other wind farms in North America, Ottawa-based environmental advocacy group Nature Canada says the figures are actually surprisingly large and represent a significant threat to several endangered species- 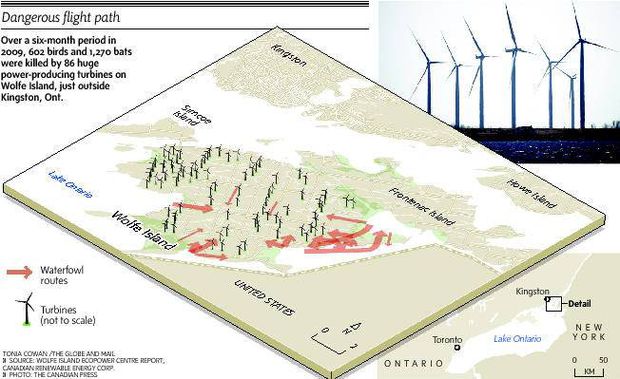 Mr. Cheskey said Wolfe Island is an internationally recognized "important bird area," or IBA, for raptors - birds of prey such as owls and hawks that hunt for small mammals to eat. The numbers of those birds killed is worrying, he said, as is the mortality of swallows, which are in decline across Ontario.
The hundreds of bats killed is also cause for "grave concern," he said, especially because they are less well understood than birds. "They are being massacred [and]we could be driving more species to extinction without understanding how or why."

I happen to love birds- a whole lot. Hawks. Eagles. I've talked about the cold winter kill offs of lake ducks that were massive here in Southern Ontario. The appearance of the giant lumbering turbines might just explain why I haven't seen a purple martin for years. I hope not!

The True Cost of Wind Power:

The true cost of wind energy is higher than most cost  estimates calculate. Mandates requiring the use of wind energy increase electricity costs for consumers, and subsidies mask the actual cost of  doing so. RPS require intermittent renewable energy to exist, but at the expense of utilities and  consumers. The PTC makes wind power cheaper for utilities and consumers, but at the expense  of taxpayers. Through  such  policies,  U.S.  policymakers  have  essentially  decided  that  electricity  consumers  will have wind power, even if it is more expensive. The cost of this decision has fallen to U.S.  taxpayers and consumers of electricity. When weighing the costs and benefits of wind power, not  including all of the hidden costs makes wind power appear to be a more attractive option than it actually  is.

I’ve absolutely no idea how this claim can be presented as fact... it reads much more like wild speculation, projected so far into the future, that when proven wrong it won’t make any difference to present day spending/debt or real energy needs.  Or dead birds and bats.
There are a whole hosts of problems with wind power.

Global warming will significantly cut the power of the wind across northern mid-latitudes, including the US, the UK and the Mediterranean region.
The research has found that there will be big changes by the end of the century in many of the places hosting large numbers of turbines. According to a new research published recently in the journal Nature Geoscience, climate change in the future might cause wind resources to decline across the Northern Hemisphere. These losses could be tempered by increases in wind power potential south of the equator under severe climate change scenarios.  Wind farms have grown more than fivefold in the last decade and plunging costs have made them a key way of reducing carbon emissions from fossil fuel burning.

But in central US, for example, the power of the wind could fall by nearly a fifth. Though the findings don’t disqualify wind as a competitive source of renewable energy yet the researchers do suggest that energy planners should take the future climate into account when creating long-term strategies for renewables. Wind powers only about 3.7% of worldwide energy consumption as of now, but global wind power capacity is increasing rapidly. It is growing at about 20% a year. In the latest study, researchers used an international set of climate model outputs to assess changes in wind energy resources across the globe. The team then used a ‘power curve’ from the wind energy industry to convert predictions of global winds, density and temperature into an estimate of wind energy production potential. While not all of the climate models agreed on what the future will bring, substantial changes may be in store, especially a prominent asymmetry in wind power potential across the globe.

Losses of wind energy stretched from central US to the UK, Russia and Japan for both medium- and high-emissions scenarios. If carbon dioxide emissions continue at high levels, wind power resources may decrease in the Northern Hemisphere’s mid-latitudes and increase in the Southern Hemisphere and tropics by 2100.


A projection 83 years into the future based on yet more computer modelling. Haven't we all had enough of this?
Posted by Penny at 7:18 PM