Massive Psychosis set to continue at the UN-


A new wave of bombs struck Syria's eastern Ghouta district unabated on Friday, witnesses said, ahead of a U.N. Security Council vote to demand a 30-day ceasefire to end one of the deadliest bombing campaigns of the war.

Besides the movement of military assets from Kurdish annexed Syrian territory there are reports of a "civilian convoy" bombed by Turkey. This was NO civilian convoy, same as there were no "prisoners" that were flown by the US to somewhere else in Syria...

This is such a preposterous narrative overall, still it's interesting to read about the locales the  civilians hailed from. Relatively calm areas in Syria and Iraq...

“A group that came from Shingal, Kobani, Manbij, they are all civilians, 1,200 civilians came at the border of Afrin, and immediately hit them from Azaz, and according to my information they were 8 injured, and there was a vehicle burned,” Cemil Sulaiman, a Kurdish official in Afrin told The Region.

You would really have to be a complete moron to believe that civilians from as far away as Sinjar (Shingal) Iraq are going to head straight into a very hot war zone. Absurd to the nth degree! It's clear these were armed and ready to go fighters! And undoubtedly they'd wave Syrian flags as they entered the battle field for the psyop, the continuing psyop, of alleged Assad loyalists going to assist the annexing YPG/PKK.

“This convoy of women, old-aged and activists were exposed to a direct aerial and artillery bombardment by the Turkish invasion army and its terrorist factions, resulting in many martyrs and wounded. The wounded civilians were moved to the hospitals in Afrin enclave for treatment,” the SDF said.


Yah, sure. (eyes roll) As stated, this narrative is so preposterous only a moron could believe that old and aged women and activists were headed to a hot war zone. I would expect that if the YPG/PKK were not using civilians as human shields we might see civilian convoys exiting Afrin- that does not appear to be happening-

What accuracy can be extracted from this absurd narrative?

1- these are fighters- not civilians

Manbij; you have US special forces embedded with Kurds. Are they part of this convoy?

Kobani: Ayn al Arab, Syria- US forces are also embedded with Kurds there

Shingal: Sinjar, Iraq- I'd just talked about this Shingal/Sinjar the other day! And this cooperation between the Hashd al Shaabi PMU and the PKK- Lo and behold we have fighters coming to Afrin from a region where the PKK cooperates with Hashd

Are these our flag waving rebels too? The Hashd al Shaabi that works with PKK in Iraq?
I'd say there is a darn good chance these fighters are being passed off as Syrian flag waving Assad loyalists

The operations conducted by the Hashd al-Shaabi forces in south Shingal show that the PKK vacated some places there which were taken by the Hashd forces
This is at a time when the Kurdistan Region, Iraqi Prime Minister Haider al-Abadi’s government and coalition forces have demanded that the PKK leave Shingal, but the group is still defying these requests. The question is: Why can’t or do the PKK not want to leave the territory controlled by the Peshmerga, but voluntarily leaves areas under Hashd al-Shaabi control.

Sputnik: Turkey destroys "aid convoy" but was it? 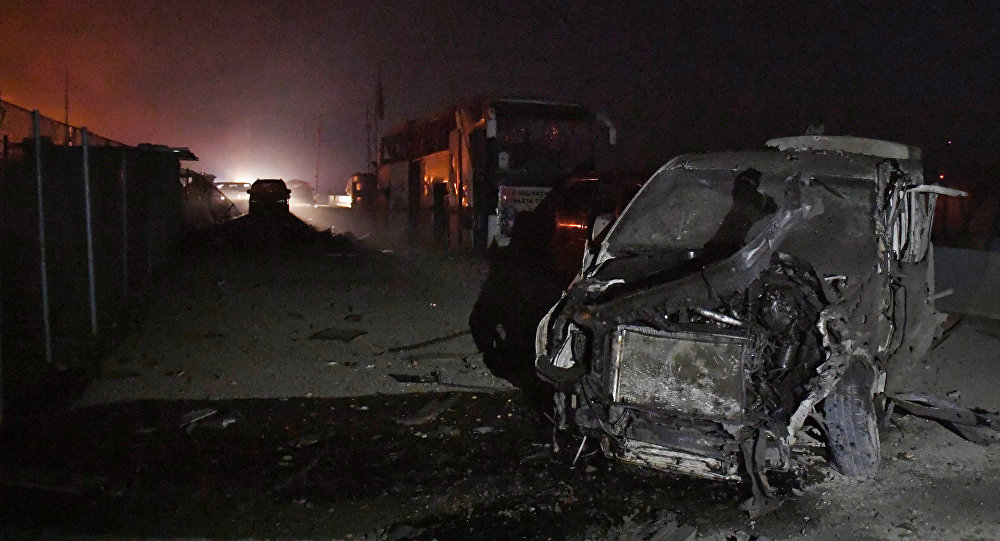 "One person was killed and seven others were injured as a result of the Turkish shelling of a humanitarian convoy and cars of residents going to Afrin in order to join the operation," the source said.

"Only the convoy belonging to PKK/KCK/PYD-YPG and Daesh terrorist groups was targeted during the operation, and utmost importance was given to not harm any civilians," Anadolu, a Turkish news agency, quoted the country's General Staff as saying.

Personally, I don't need anyone from Turkey telling me this was a convoy carrying fighters and arms. The report from The Region made it abundantly clear that this was indeed fighters heading for Afrin.

I have difficulty understanding why some insist on presenting (false flag)YPG/PKK affilliates moving into Afrin as something good for Syria- I see it as a foot in the door desired by the USrael/UK,  if Damascus is seen to be attacking a so called NATO ally. Not that NATO has much use for Turkey in it's present state. But as a convenient reason to attack Syria and overthrow Assad- this ruse is very useful to the 5 eyes tyranny.

It was reported yesterday that YPG/PKK have handed some neighbourhoods in Aleppo back to SAA-
Presented as part of this alleged deal for Afrin.. I left his comment at syrian perspective

What makes vastly more sense wrt YPG/PKK leaving Aleppo city/SAA take over in my opinion? (Assuming this is accurate reporting)
PKK/YPG desperately need reinforcements in Afrin as evidenced by their call for SAA to help- may as well give up a completely surrounded neighbourhood- to move fighters and hopefully hold onto the afrin border area- which further suggests they are being routed by the Turkish operation.

YPG commander in Aleppo, Furat Xelil/Khalil, says the Kurdish force has lost control of its districts in east Aleppo (Sheikh Maqsoud) to the Syrian regime, because the YPG there travelled to Afrin to get involved in the “Resistance of the Century”. Via @tobiaschneider

Bundy ” Kurdish force has lost control of its districts in east Aleppo (Sheikh Maqsoud) to the Syrian regime, because the YPG there travelled to Afrin

Isn’t that exactly what I stated?
“PKK/YPG desperately need reinforcements in Afrin as evidenced by their call for SAA to help- may as well give up a completely surrounded neighbourhood- to move fighters and hopefully hold onto the afrin border area-
It just made sense, ya know?


The Kurdish People''s Protection Units (YPG) militias will deliver the Syrian Army in the next 48 hours the neighborhoods they control in the northern city of Aleppo, media reports said today. According to the Syrian State Television, the Kurdish forces will grant the armed body of this nation more than a dozen Aleppo areas, including the Sheik Maksud, Halak, Boustan Basha, Haidarieh and Ain Tal neighborhoods.