What's the Deal in Afrin? Loyalist PMU's to Ally with PKK/YPG?

The convoluted saga of Damascus aiding the YPG/PKK in Afrin continues to be presented as fact.
Is it? I'm less then certain at this time.

If Damascus was to aid the YPG/PKK what did they get in exchange? It's sensible that if an agreement was made Damascus would have had to gain something for the assistance.
I don't believe the Assad government is a government of fools and idiots.

The YPG/PKK is keeping Syria's army and it's people/government away from most of their oil and water assets in the east, yet, I'm supposed to believe that the Assad government is going to run along and aid YPG/PKK in exchange for nothing?

That idea troubles me. The whole narrative for this story came from YPG/PKK themselves. It started yesterday.... And yes, I'm aware that SANA has a report from someone on the ground in Aleppo that this is set to occur-


SANA’s reporter in Aleppo said on Monday that popular forces are to arrive in Afrin area soon to support locals in facing the aggression launched by the Turkish regime on the area since January 20th.


But that could just be the talk in the vicinity. I don't know?

This is interesting from the BBC:

"From the Kurdish perspective, Mr Jia Kurd said: "We can co-operate with any side that lends us a helping hand in light of the barbaric crimes and the international silence."


However, he also warned that the purported agreement - which he said did not include any political arrangements - could fall through"


An agreement that could fail before it's even been enacted?


According to the official, (named above) Ankara doesn't believe these reports, adding that Turkey didn't have any proof yet.
However, as the deputy foreign minister specified, if the Syrian armed forces entered Afrin to support Kurdish militants, this would lead to a catastrophe, giving a green light to the country's split.

The news that regime forces will enter Afrin is unreal- Not Real? False?


And this were the rumored condition 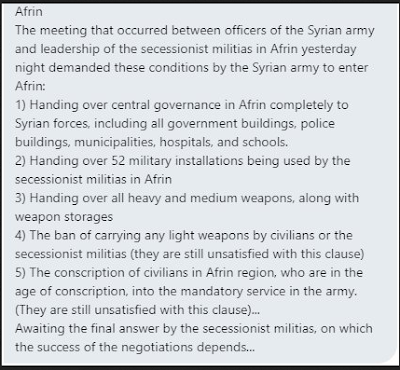 Clearly the Kurdish spokesman was lying when claiming that the YPG/PKK would make no concessions....

No agreement with Syrian regime, only a call to protect border: Kurdish forces spokesperson

A spokesperson for the Kurdish People’s Protection Units (YPG) on Monday denied reports of a deal with the Syrian government to enter Afrin where a Turkish military incursion is ongoing.
Speaking to Kurdistan 24 during a live broadcast, YPG spokesperson Nouri Mahmoud said the Kurdish forces had not signed an agreement with the Syrian regime to enter Afrin but had only called on the army to protect the borders.

“Our forces have not reached an agreement. We have only called on the Syrian army to defend the borders from Turkey’s assault,” Mahmoud clarified. “There has been no agreement with the Syrian government for the handing over of Afrin.”


Just as I had suspected!

"In discussing the situation in Syria special attention was paid to ways of further enhancing cooperation in the Astana format. The readiness was confirmed for tight coordination of efforts by Russia, Turkey and Iran for the sake of achieving effective operation of the de-escalation zones and advancing the political process in line with the agreements achieved by the Syrian National Dialogue Congress in Sochi," the Kremlin’s press-service said.

Putin and Erdogan touched upon the situation in northwestern Syria, including the Turkish military operation near Afrin.

Also, they noted "positive trends in Russian-Turkish cooperation" and agreed on a number of contacts at different levels in the near future