May 14/18- PROVOCATIVE Opening of US Embassy in Jerusalem

May 14 1948: Israeli Declaration of Independence


The Israeli Declaration of Independence,[note 1] formally the Declaration of the Establishment of the State of Israel (Hebrew: הכרזה על הקמת מדינת ישראל‎), was proclaimed on 14 May 1948

This new embassy is not so much an actual embassy as it is a ‘branch office’ of the main embassy in Tel Aviv.  Yet the US is insisting on the placement of the office in Jerusalem.
And to make matters worse the date of May 14/2018 marks the 70th anniversary of Israel's "independence" followed one day later by the Nabka which marks 70 years of Palestinian displacement. Obviously the opening has been chosen to be intentionally provocative.
Why? Why be intentionally inflammatory?


The move on 14 May will mark the start of a potentially volatile week when Israel will celebrate its 70th anniversary and Palestinians mark the “catastrophe”, or Nakba, of their displacement on the 15th.

The situation between Israelis and Palestinians could not be more delicate,” wrote Ilan Goldenberg, who served as part of the US team during the 2013-14 Israeli-Palestinian negotiations, in an opinion piece for the Israeli paper Haaretz.

The embassy move, he said, may pass without significant violence, pointing to the lack of anticipated instability following Donald Trump’s December announcement to relocate the embassy. “Or it could explode – and we could find ourselves in the middle of a new war between Israel and Hamas in Gaza. Nobody knows, but it is irresponsible for the US to be dumping gasoline on this potential fire,” he said.

"It is irresponsible for the US to be dumping gasoline on this potential fire"- And yet, that is exactly what the US is choosing to do. With their Israeli partners. I'm very leery of what may occur


On the weekend ahead of the embassy opening, thousands of Israelis are expected to mark what they say is the city’s reunification in a Jerusalem Day rally. Often made up of religious settlers, These marches pass through Muslim district of the Old City and in previous years groups have chanted anti-Arab insults.

'Will Come at a Price,' Israeli Defense Chief Says

Avigdor Lieberman says 'historic, important and dramatic' decision to move U.S. embassy to Jerusalem will have a price that is 'worth paying'

Defense Minister Avigdor Lieberman said on Saturday that relocating the U.S. Embassy in Israel to Jerusalem will "will come at a price," but added that it was a price "worth paying."

Speaking on Meet the Press on Israel Television News Company, Lieberman called the opening the embassy in Jerusalem a "historic, important and dramatic" decision.

"Nothing comes for free," the defense chief said, "and the opening of the U.S. Embassy in Jerusalem will come at a price and it is worth paying it. We should be prepared to pay a price."

U.S. President Donald Trump said last month that he still "may go" to the ceremony in Jerusalem celebrating the opening of the American embassy, and bragged about saving money by rejecting an initial proposal to devote $1 billion for the construction of a new embassy, and replacing it with a significantly more moderate plan costing close to $400,000 instead.

Jared Kushner and Ivanka Trump, both advisers to the president, are expected to represent the U.S. administration at the opening ceremony, Israeli officials confirmed last month. The official said American senators and members of the House of Representatives will attend, too.

The embassy will initially be located in a facility in Jerusalem's Arnona neighborhood that handles consular affairs, such as passports and visas. At first, the embassy will only accommodate U.S. Ambassador to Israel David Friedman and a small team of staff. The site of a future permanent embassy has yet to be found, according to the State Department.

The US does not need to do this. Why are they?


An interesting little observation: Roseanne is back. Apparently in her television show she is "pro- Trump"-  Most probably she is pro- Trump in her 'real life'- She thanked Trump recently for moving the embassy to Jerusalem. 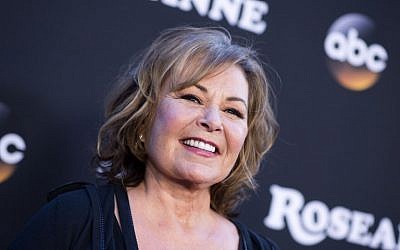 "I said, 'Mr. President, on behalf of my mother, I want to thank you ... for moving the embassy to Jerusalem. Thank you so much,'" Barr said at The Jerusalem Post's annual conference in New York. "And he said, 'Well, you know a lot of presidents have promised it, but I wanted to get it done.'"
"I think it's the first step to peace in the world, I really do," added Barr.

Let's define peace, shall we?