Severe ice conditions- Severe ice conditions- Saw them for myself this past week end.
Saw the ice breaker too. I've seen them for the years now in the Canal and Lake
But let's pretend it's warm... Cause most people like pretend. They ignore nature's reality. Preferring their 'smart phone' delusions and the words of the agenda pushing soothsayers.


As two Canadian Coast Guard icebreakers work to clear severe ice off of Port Colborne, at least a dozen vessels are being held up in the Welland Canal and just offshore.

"We have seven ships in the canal waiting to go that direction," Ruhl said Tuesday.

Severe ice. Ships waiting in the canal to get into Lake Erie.
Recall my mentioning the wall of ice in Lake Erie?


Ice Walls and Persistent Cold- Less then 3 Weeks Till Spring

Well.... spring is here.
It's been cold. A couple of more spring like days, but, overall the trend is cool.
Flurries are still in the forecast. 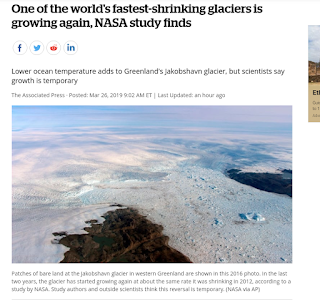 CBC is the source

"Lower ocean temperature adds to Greenland's Jakobshavn glacier.....It started growing again at about the same rate in the past two years"

"That was kind of a surprise" Didn't fit the lie?

"The water in Disko Bay, where Jakobshavn hits the ocean, is about 2 C cooler than a few years ago, study authors said"

The ocean is 2 C / 5 F cooler then a few years ago? How's that possible on planet with runaway warming?  Sticking with facts, ignoring spin, I ask...

How is it that these 'scientists' didn't see this drop in ocean temperatures?

No predictions? No computer models? No cooling?

And yet, the real world does not comply with the agenda.

God Bless Climate Change
"You've Got to Pick a Pocket or Two, Boys"

Avail yourself of the pdf Yaya has made available:

Richard Lindzen is not your typical young, eager climate scientist perpetually on the lookout for funding. If anybody would be familiar with the proclivities of MIT (and in fact of any university that relies on funding from, shall we say, interested parties), Prof. Lindzen certainly would.

So, it's worthwhile to check out his easy-reading paper:
Science in the Public Square: Global Climate Alarmism and Historical Precedents (PDF)

The oceans are a huge factor in global climate change.

A fact that is always glossed over by the  anti life carbon cult.
How is that even realistic? Considering the oceans cover more then 70 percent of the planet. While holding 97 percent of earth's water.

The planet Earth is a planet of oceans. Oceans cover about 71 percent of the Earth's surface.
The oceans' tremendous presence causes it to have a huge effect on the planet and our civilization. It is greatly responsible for the climate of the Earth