Ian Tomlinson did NOT die of a heart attack

A second post-mortem into the death of Ian Tomlinson showed he died from an "abdominal haemorrhage" and not a heart attack, a solicitor for Mr Tomlinson's family said today. Mr Tomlinson, 47 died during the G20 protest. Video footage shows him being pushed to the ground by a police officer. 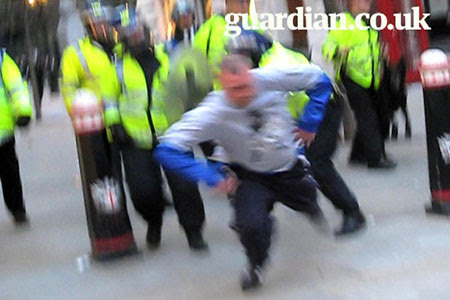 Newsagent Mr Tomlinson, who was not protesting, is seen receiving a two-handed push from a police officer.

cctv? Is this from the cctv cameras that the IPCC claimed did not exist.
Posted by Penny at 10:51 AM