The latest addition to our household

We have a new baby at our house! Isn't it exciting?! Ok, well it is for me it is.

How can anyone not love a baby? Of any kind.

Out of nowhere, or so it seemed, a nest was built in the backporch and came fully occupied-
with a pair of mourning doves. How had I missed the entire process of the nest being built?
I don't know.
Maybe, Mr and Mrs M. Dove, worked quickly, diligently and very stealthily?
Or maybe I was simply not paying attention to all the spring activity? 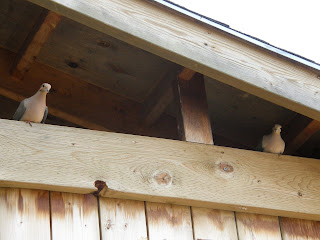 One of the birds sat, alot of the time. Sometimes the mate flew in and there was cooing and such. I honestly can't tell which is male and which is female, but it doesn't matter really, they were together and obviously in a parental way.

While the birds seemed to have settled quite nicely into their new surroundings, suddenly danger was lurking everywhere. Ferocious neighbourhood cats began to appear!

Having birds nest in your porch, makes one aware of just how many cat's are in the neighbourhood. I had to chase them away to keep my little doves safe. And I did! Though I had difficulty with one very persistent cat. Who I caught climbing the wood posts to get up to the nest. Eventually this one got the hint, after chasing, much banging and noise making and it stayed away.

The doves were pretty tolerant of us, maybe they appreciated the safe haven we had provided. Peering into the nest we noted there were two eggs.
We have been patiently waiting and waiting for the babies to hatch.
Well yesterday, we noticed nesting bird was sitting off to the side of the nest.
Aha, there must be a baby bird!
Sadly one egg did not hatch, but happily the other did. The first baby pictures!
One brand new baby mourning dove!
Cute huh? 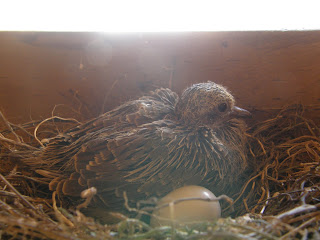