Charles Manson. One of the central figures in the Laurel Canyon Saga from Dave McGowan has reached out to convicted killer, and producer extraordinaire Phil Spector. Who knows maybe they already have some history? 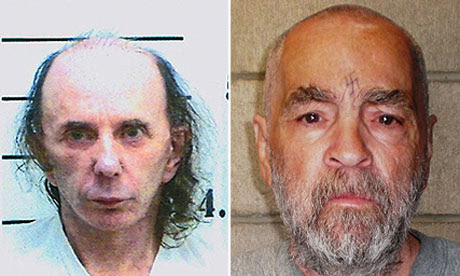 Manson contacted Spector shortly after the producer arrived, dispatching a guard with a note. "[Manson] said he wanted him to come over to his [cell]," Spector's wife, Rachelle, told the New York Post. "He said he considers Philip the greatest producer who ever lived."

Manson and his followers recorded songs with the Beach Boys' Dennis Wilson. Terry Melcher, who produced the Byrds' Turn, Turn, Turn, was another acquaintance – and a target – of the group.

In the 1960s, Manson befriended the Beach Boys' Dennis Wilson and the group (Beachboys) released a reworked version of his track 'Cease To Exist' as 'Never Learn Not To Love' in 1968.

Anyone ever heard that one, not being a Beach Boys fan at all....

Manson has made several records while in prison