My first thought upon hearing this news story? Richard Reid the Shoe Bomber. What a character!

This was earlier reported as a case of a passenger setting off fire crackers on the plane. So, I thought at that time possibly someone who had been drinking to much?

One report I saw mentioned the alleged terrorist name had been spelt in different ways.
That is always interesting.

This is curious-
According to US Senator Peter King, Mr. "We'll take care of the counting", the would be terrorist's name was on an intelligence watch list, but his name never made it to the no fly list.

Peter King confirmed that the man, identified as Nigerian citizen Abdul Mudallad, 23, probably had terrorist links as investigators discovered his name in the intelligence agency's list.

However, the man reportedly has not appeared on the U.S. Government's "no-fly" list.

Officials in the Netherlands said an initial investigation showed that routine security procedures were followed at Schiphol Airport in Amsterdam with no irregularities. Mutallab's name was on the passenger manifesto that was forwarded and approved by U.S. authorities before takeoff.

So we have the Senator informing the populace that this man's name appeared on an intelligence agencies list as having 'terrorist ties'. However, his name is not on the 'no fly' list.

He passed through all routine security at the airport. His name was on the passenger manifesto and the list was approved by US authorities before takeoff? But, we are supposed to believe that he was on some intelligence list?

Upon having more time to read, this one is the son of a Nigerian banker. The father feared that his son may have been the one on the plane that detonated the firecrackers/explosives, because he had been to Yemen!

"I believe he might have been to Yemen, but we are investigating to determine that," said the elder Mutallab, who served as chairman of First Bank of Nigeria from 1999 through this month.

Intelligence and anti-terrorism officials in Yemen said they were investigating claims by the suspect that he picked up the explosive device and instructions on how to use it in that country. The officials spoke on condition of anonymity because they are not authorized to speak to the media.

Is there more then one Umar Farouk Abdulmutallab?

University College London issued a statement saying a student named Umar Farouk Abdulmutallab studied mechanical engineering there between September 2005 and June 2008. But the college said it wasn't certain the student was the same person who was on the plane.

The connection to Yemen? How fortuitous for the US. Now they can publicly justify what they have been doing, rather under the radar, for a while now. Killing civilians

I am sure this was scary for the passenger, however, reading eyewitness accounts, the fire was put out with bottled water.

She said three men leaped out of their seats to restrain the man and put out the fire, using water bottles and their bare hands.

One more thing-
I have a tough time seeing a parent take this type of action.

The investigative file was opened after Mr. Abdulmutallab’s father warned officials at the United States Embassy in Nigeria of his son’s increasingly extremist religious views, the official said.

This is just to fishy.
I am including a map of the region including Yemen, Somalia, Ethiopia and Gulf of Aden. 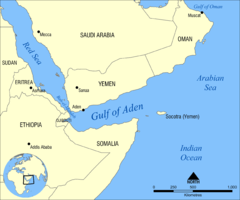