A Tale of Two Terrorists?

I have made mention of this phenomena previously, but, a quick post to illustrate the point.

The photos in the press of alleged terrorist Umar Farouk Abdulmutallab are so blurry, that his identity is somewhat obscured. I find this really odd. But, it is not just the poor quality of the photos, it is the fact that there appears to be two different looking alleged terrorists!

Here are two examples:
From the Guardian, Toronto Star and most of the major western media outlets 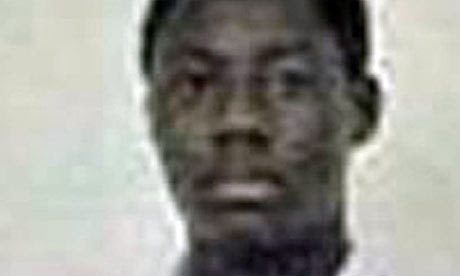 Now a photo from Ghana press:

The man in the photo in the Guardian: thinner face and nose, fuller lips.
From the Ghana Press: we are looking at a man with a much rounder face, broader nose and thinner lips.
They don't even look like the same people, despite the obscurity of the photo being used in the Western Media.
Posted by Penny at 8:17 AM