Jeju Island-the fight against the base continues

Jeju Island, struggles against the building of a very strategic base on their tiny piece of paradise.
Refresh your memory with this post.Naval Base on Jeju Island - China's strangulation continues

While most may not realize it, this base is part and parcel of the bigger picture of controlling trade routes globally, and by extension the countries that depend on this trade. Haiti is part of that scene.

Here is the latest news  on Jeju Island and their struggle against a military base. NO Jeju Island Navel Base

-Around 5am Monday: 500 police were mobilized with three cranes. Police raided the planned site for the ceremony for starting to work on the naval base [ which will be home base for Navy Aegis destroyers of U.S. and South Korea outfitted with "missile defense" systems and used to surround China's coast].  It is in the east side of the village and the village people had been barricading the site with the cars since when the cranes contracted by the navy first entered the site on Jan. 6. About 30 village people succeeded to block it at the time. It is known that the police harshly acted today, against the people who are mostly in their old ages.  The village people laid their bodies on the ground and cried to rather kill all of them. They pushed the old women and men.  The police did not even mind women’s underwears were taken off duringthe body struggles. The whole story reminds the Pyeongteak when the police attacked the village early in the dawn of May 4, 2006.

The mayor came out and was arrested. 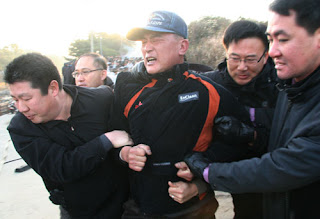