The actual headline of this story is CIA Role is Faulted in Air Crash over Peru
It was originally titled "CIA Misconduct is Found in Peru"
Both titles are misleading. I'll explain why.

First off, you cannot crash over a country. (unless two planes were involved but then that would be a mid-air collision) The use of the word 'over' indicates it somehow crashed while still over Peru, or in flight. If the plane is in flight it is not crashed.
Secondly, the plane was shot down, by the CIA, which caused it to crash.
Thirdly, it is not misconduct, it is business as usual for the CIA. They shoot down planes and that is what they were in Peru to do
These titles makes zero sense when one actually reads the story.
The only concern's expressed seem to be for what happened afterwards. The cover-ups. Not the fact that planes were being shot down, just how it was handled after the damage had been done.

So let's read the story-

Officers involved with a secret counternarcotics mission in the Peruvian jungle routinely violated agency procedures, tried to cover up their mistakes, and misled Congress immediately after a missionary plane was accidentally shot down in 2001, according to a blistering C.I.A. internal report released on Monday.

The declassified 2008 report by John L. Helgerson, then the C.I.A.’s inspector general, documents a culture of negligence and deceit inside the C.I.A. program in Peru. The report also details a pattern of C.I.A. stonewalling that included keeping results of a C.I.A. review of the 2001 downing of the plane from the White House and the Senate Intelligence Committee.

The 2001 episode, which resulted in the killing of an American missionary and her infant daughter, occurred when C.I.A. officers misidentified the missionary plane as a drug-smuggling aircraft and ordered the Peruvian military to shoot it down. The missionary’s husband, their son and the pilot survived. Parts of Mr. Helgerson’s report were released in 2008, so the broad conclusions of the Peru investigation were already known.

But the full 300-page report paints a detailed portrait of the troubled covert program.

The report concluded that top C.I.A. officers misled members of Congress when they portrayed the April 2001 episode as an anomaly in an otherwise well-run program, and that C.I.A. lawyers repeatedly intervened with Justice Department officials to prevent prosecutions in the case.

The report also said that the spy agency had concealed internal findings from victims of the downing of the plane and their relatives, who had sued the government.

“The U.S. government paid $8 million to the victims based on C.I.A.’s assertion that the missionary shootdown had been an aberration in a program that otherwise had complied with presidentially mandated procedures,” the report said.

The C.I.A.’s counternarcotics program based deep in the Amazon forest of Peru was begun by President Bill Clinton in 1994 to assist the Peruvian Air Force, which had the authority to intercept or shoot down planes that did not comply with orders to land.

Mr. Helgerson’s investigation found that C.I.A. officers had violated established procedures in most of the 14 downings of planes in Peru before the April 2001 episode.

“CIA officers knew of and condoned most of these violations,” the report read, “fostering an environment of negligence and disregard for procedures.”

The Justice Department in 2005 declined to prosecute any of the C.I.A. officers involved in the missionary case. But the 2008 inspector general’s report found evidence that some C.I.A. officials had deliberately withheld information about the case from federal investigators.

Dean Boyd, a Justice Department spokesman, declined to comment on whether the department had reopened an inquiry into the matter.

The report concluded that the C.I.A. officers’ “failure to provide adequate oversight and report violations precluded a policy review and a possible change of course that could have prevented the shootdown of April 2001.”

A CIA press release claims that administrative penalties were "meted out" to 16 current and retired officers last December. Doubtful.

In other words business as usual. The shoot downs in Peru had nothing to do with keeping America safe. If the CIA has to keep shooting planes down in Peru, or elsewhere they will, they will......

An original news story BBC 2001.
Notice the spinning starts immediately?
The Americans thought it was a mistake. The contacted the Peruvians and said take no hostile action. Contradicting what came out of the latest report.

Interesting to note.....
while the shootings were occurring at the behest of the CIA.
The pilot of the missionary plane was in contact with air traffic control in the city of Iquitos.

After the jet opened fire, the pilot of the missionary plane, Kevin Donaldson, could be heard shouting, "They are killing us!" as he spoke with the air control tower in the city of Iquitos.

Mr Donaldson managed to land the plane, which is fitted with pontoons to land on water, on the Amazon River, and survived, along with Veronica Bowers' husband, Jim, and their 6-year-old son, Cory.

The CIA has now debriefed the American crewmen and concluded they handled their role properly. 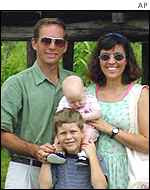