Revolutions in North Africa linked to the growth of Islamic Banking ?

Today, this bit of news crossed my consciousness...
Tunisia opened it's first Islamic Bank, that is a sharia compliant bank, May 2010.

North Africa has begun to embrace Islamic finance after years watching from the sidelines, partly to channel more Arab Gulf petrodollars into the region.

North Africa has begun to embrace Islamic finance?! to channel more petrodollars into the region?! Hmmmmm...........
Could this have been a factor in the sudden need to get rid of the leadership?
Money and petrodollars? Let's read a bit more, shall we??

Tunisia, along with Morocco, authorised Islamic finance in 2007, partly to channel more investment into their fast-growing tourism and real estate industries. 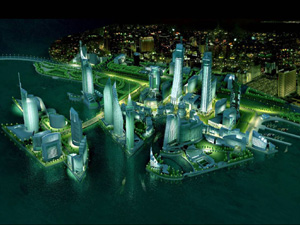 That is right, not just Tunisia, Morocco too.
And, per chance what is the latest from Morocco??

"The 20 February movement had called for new protest marches today and tomorrow."
Protesting for "democratic reforms" of course?

Does the February 20 movement remind you of anything? Any other movement come to mind.
OH YA! Egypt. The April 6 movement. Instrumental in the uprising for "freedom and democracy" which now see's the Egyptians ruled by a military junta..

And what about the February 20 Movement are they also using Facebook?

The bank officials stressed that it has established relations with a number of financial institutions, including 12 Islamic banks, in collaboration with the Institute of Islamic banks in Bahrain.

Bahrain! And another uprising!

Taking this thought further, imagine the implications for the International western banksters, if Islamic banking in accordance with Sharia law was to continue expanding and taking with it the Arab petrodollars from the region??? That would certainly, in time, see the Islamic banking system in control of a lot of money, and able to wield power globally.

I am going to expand on this thought, which must have been simply terrifying to the banking cartel of the west!
From an article here

Rising oil wealth is lifting Islamic banking - which adheres to the laws of the Koran and its prohibition against charging interest - into the financial mainstream.

"This is an industry on its way from a niche industry to becoming a truly global industry," said Khawaja Mohammad Salman Younis, the managing director for operations in Malaysia for Kuwait Finance House, the world's second-largest Islamic bank, after Al-Rajhi Bank. "In the next three to five years you'll see Islamic banks coming out in Australia, China, Japan and other parts of the world."

I don't think so.

The stampede into Islamic finance is mostly an effort to tap an estimated $1.5 trillion of funds sloshing around the Middle East, largely from higher oil prices.

Does Islamic banking fit the western bankers ideals. Share the borrowers risks? Profit sharing?
Depositors treated like shareholders?
Is it plausible that the bankster thieves at JP Morgan or Citigroup, Barclay's etc., would really go for banking done on these terms? Think about it!

After reading that and seeing the movie Inside Job, you can be sure as hell the Western banking model of usury, extreme and compounding usury has no interest in allowing Sharia compliant Islamic banking to get a foothold on the globe.

( A brief aside: Inside Job, does not address the big issues with banking, usury and private control, nonetheless it does a good, no a very good job, of explaining the scam and scandal of the mortgage backed investments, the taxpayer bailouts and the big bank profits/bonus's. You will be furious. )

They also envision wider appeal for Islamic banking's ban on interest, which stems from the Koran's prohibition against usury.

This is a view that has a long religious and historical tradition.

Interest is repeatedly condemned in the Bible. Aristotle denounced it, the Romans limited it, and the early Christian church prohibited it.

And life has gone down hill for the average citizen every since. Oh and by western theologians they mean the theologians of Judaism and Christianity.

But, getting back to our calender dated uprisings. I guess the colour coded revolutions were getting tiresome.... Is it a coincidence that these so called spontaneous uprisings with cries for "western style democracy" just happen to be showing up in countries with growing Islamic banking systems????

I will say, I am not a coincidence theorist.
Posted by Penny at 7:51 AM