Hold on tight world!!
This is a round up of the latest news...

OMA, Japan — Dangerous levels of radiation leaking from a crippled nuclear plant forced Japan to order 140,000 people to seal themselves indoors Tuesday after an explosion and a fire dramatically escalated the crisis spawned by a deadly tsunami.

In a nationally televised statement, Prime Minister Naoto Kan said radiation has spread from four reactors of the Fukushima Dai-ichi nuclear plant in Fukushima state, one of the hardest-hit in Friday's 9.0-magnitude earthquake and the ensuing tsunami that has killed more than 10,000 people, plunged millions into misery and pummeled the world's third-largest economy.

A Japanese nuclear safety official said Tuesday the water inside the waste fuel storage pool for a damaged reactor at an atomic power plant may be boiling.

Hidehiko Nishiyama of the economy ministry that oversees nuclear safety told reporters Tuesday that ``we cannot deny the possibility of water boiling'' in the pool.

The International Atomic Energy Agency said Tuesday that Japanese officials told it that the reactor fire was in the storage pond — a pool where used nuclear fuel is kept cool — and that ``radioactivity is being released directly into the atmosphere.''

Which leads to this story

Japan has informed the International Atomic Energy Agency (IAEA) that a spent fuel storage pond at an earthquake-hit reactor is on fire and radioactivity is being released directly into the atmosphere, the Vienna-based U.N. atomic watchdog said.

Japan told the IAEA that dose rates of up to 400 millisievert per hour have been reported at the Fukushima Daiichi nuclear power plant site. "The Japanese authorities are saying that there is a possibility that the fire was caused by a hydrogen explosion," IAEA said.

And to make matters worse! There has been a third explosion

There has been a third explosion and fire there.(Fukushima) Officials have extended the surrounding danger zone, warning people within 30km to evacuate or stay indoors, while radiation levels in Tokyo are reportedly higher than normal.

The new explosion appears to have damaged one of the reactors' containment vessels for the first time. If it is breached, there are fears of more serious radioactive leaks.

In a televised address, Prime Minister Naoto Kan said: "There is still a very high risk of more radiation coming out."

Mr Kan added that the last remaining people within the existing 20km exclusion zone around the plant must leave.

Japan in meltdown: THIRD reactor blast hits N-plant as it's confirmed radiation 'has been released into the atmosphere'

Some good diagrams here from the above article.... 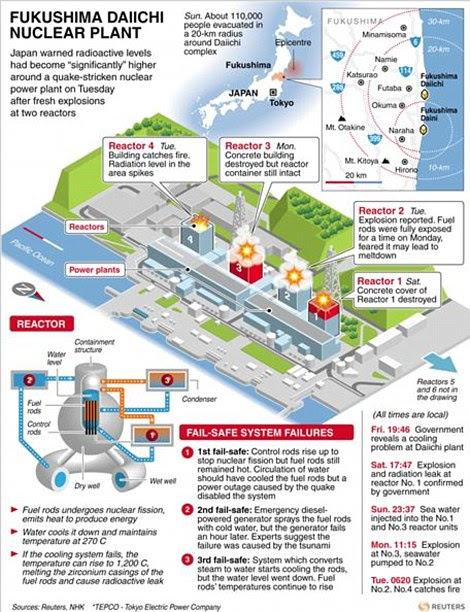 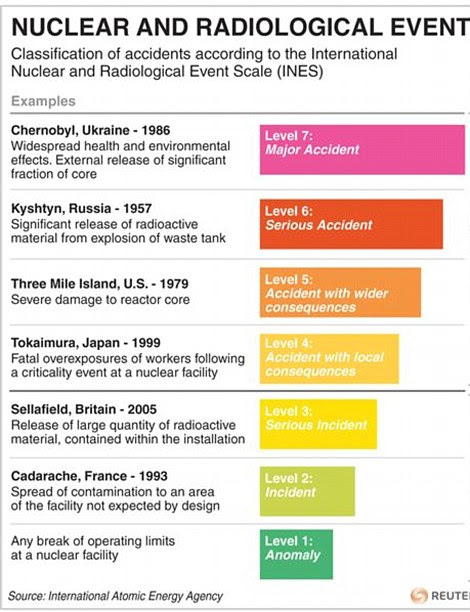 As of now this article is stating the Fukushima meltdowns are a level 4, but I saw this yesterday and it is mentioned in this article:Fukushima may top Three Mile Island

Fukushima Dai Ichi nuclear plant has likely released more radioactivity than Three Mile Island and the crisis could last for weeks, according to France’s nuclear watchdog.

The event may rate 5 or 6 on the seven-step scale of nuclear incidents, Andre-Claude Lacoste, chairman of the Autorite de Surete Nucleaire, said at a briefing in Paris today. “There is no doubt there was the beginning of a meltdown of the core of reactors 1 and 3 and likely 2 as well.”

“Significant radioactivity was released and certainly more than at Three Mile Island,” she said, declining to provide figures. The Three Mile Island nuclear accident, in 1979, was the worst in U.S. history.

The French officials said they are basing their assessment on information provided by Japanese nuclear authorities.

AND, speaking of Three Mile Island, here is a post from way back. Something I am certain a great many people were unaware of ! 3 Mile Island Leaks, again in 2009. (read in full at link)

LOCAL authorities have defended their decision to delay the disclosure of a radiation leak at the Three Mile Island nuclear power plant in Pennsylvania that forced the removal of 150 workers at the weekend.
About 20 employees were contaminated by radiation.