This is an enlightening article

It looks as if cost cutting prevailed over safety when it came to the Mark 1 reactor. As far back as 1972 there have been issues..

The warnings were stark and issued repeatedly as far back as 1972: If the cooling systems ever failed at a Mark 1 nuclear reactor, the primary containment vessel surrounding the reactor would probably burst as the fuel rods inside overheated. Dangerous radiation would spew into the environment.

Now, with one Mark 1 containment vessel damaged at the embattled Fukushima Daiichi nuclear plant and other vessels there under severe strain, the weaknesses of the design — developed in the 1960s by General Electric — could be contributing to the unfolding catastrophe. When the ability to cool a reactor is compromised, the containment vessel is the last line of defense...

But the type of containment vessel and pressure suppression system used in the failing reactors at Japan’s Fukushima Daiichi plant — and in 23 American reactors at 16 plants — is physically less robust, and it has long been thought to be more susceptible to failure in an emergency than competing designs.G.E. began making the Mark 1 boiling water reactors in the 1960s, marketing them as cheaper and easier to build — in part because they used a comparatively smaller and less expensive containment structure.

In 1972, Stephen H. Hanauer, then a safety official with the Atomic Energy Commission, recommended in a memo that the sort of “pressure-suppression” system used in G.E.’s Mark 1 plants presented unacceptable safety risks and that it should be discontinued. Among his concerns were that the smaller containment design was more susceptible to explosion and rupture from a buildup in hydrogen — a situation that may have unfolded at the Fukushima Daiichi plant.
“What are the safety advantages of pressure suppression, apart from the cost saving?” Mr. Hanauer asked in the 1972 memo.

Questions about the G.E. reactor design escalated in the mid-1980s, when Harold Denton, an official with the N.R.C., asserted that Mark 1 reactors had a 90 percent probability of bursting should the fuel rods overheat and melt in an accident.

I touched on this in yesterday's post Greater Danger lies in Spent Fuel then in Reactors. All the spent fuel stored at the reactor site!!!!

If you heard the interviews from yesterday you would also know this was mentioned as being possibly worse then Hiroshima or Nagasaki due to the massive quantity of fuel stored at the reactors. Is this insanity or what?

Some countries have tried to limit the number of spent fuel rods that accumulate at nuclear power plants: Germany stores them in costly casks, for example, while China sends them to a desert storage compound in the western province of Gansu. But Japan, like the United States, has kept ever-larger numbers of spent fuel rods in temporary storage pools at the power plants. 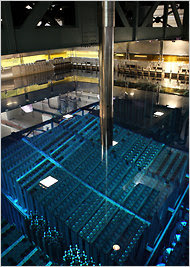 Figures provided by Tokyo Electric Power on Thursday show that most of the dangerous uranium at the power plant is actually in the spent fuel rods, not the reactor cores themselves.

The electric utility said that a total of 11,125 spent fuel rod assemblies were stored at the site. That is about four times as much radioactive material as in the reactor cores combined.

Now those temporary pools are proving the power plant’s Achilles’ heel, with the water in the pools either boiling away or leaking out of their containments, and efforts to add more water having gone awry. While spent fuel rods generate significantly less heat than newer ones do, there are strong indications that some fuel rods have begun to melt and release extremely high levels of radiation. Japanese workers struggled on Thursday to add more water to the storage pool at Reactor No. 3.(The very dangerous MOX fuel reactor)

Zirconium, once ignited, burns extremely hot and is difficult to extinguish, added Mr. Lahey, who helped write a classified report for the United States government several years ago on the vulnerabilities of storage pools at American nuclear reactors.

These articles are linked within the post, so take the time to read them entirely
Posted by Penny at 5:06 PM