Another long one, because I have the time to organize all my thoughts, hopefully, and take a broad look at how we got to where we are at.

You may wonder why I am stepping back in time to this post?
I am going to do some dot connecting....because nothing happens in a vacuum.

The uprisings in the Middle East and North Africa are directly connected back to QE2 and the economic warfare it was going to guarantee. Economic warfare that was intended to destabilize emerging economies. Emerging economies means, nations with high unemployment and low incomes and largely underdeveloped. Nations such as Egypt, Libya, Yemen etc., etc., Nations that are to be exploited by western interests.

"QE2, the US acting alone, fuels speculation that the US is attempting to devalue the dollar in a stealthy fashion (which it is) Also the flooding of foreign markets with US dollars will lead to rampant and wild speculation (creating bubbles) and the destabilization of emerging economies."

What we have witnessed these past few months has been a speculative bubble in the commodities market. Specifically food and energy.

"Ever since QE2 was announced in November, commodity prices have surged. Critics say it flooded the world with liquidity, which in turn devalued the dollar and drove institutional investors out of US treasuries and encouraged them to seek higher returns for food commodities."

The banks, of course, are the big players in the speculation. This planned economic warfare has played a role in the destabilization of all the nations we have seen in upheaval recently. The article above mentions as an example Goldman-Sachs. I'll let you read that for yourself. 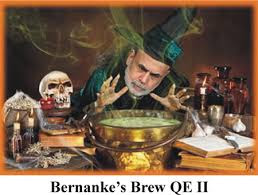 First dot: QE2, flooding the markets with money, leading to wild speculation in the food markets.

Second dot: high food prices lead to despair in lower income nations, making them ripe for the picking by the US/NATO/Israeli/British Complex. Who I will refer to, for brevity, as just NATO.

This helped create the volatile component that produced outrage in the streets of Egypt, Libya and elsewhere in the Middle East.

When people are hungry, a nation with an out of control printing press can toss all sorts of money around. As we have seen in Tunisia, Egypt, Libya and Yemen.

Third dot: I want to get to the energy aspect of this economic warfare-

Speculation has been driving the energy prices. Not instability. There is plenty of oil. Saudi Arabia has offered to ramp up production. Libyan oil is a mere fraction of the global oil inventory.
But, speculators (banks) loaded up with American dollars, have taken advantage of the upheaval in Libya and other nations to push the price of oil upwards! Doing some reading today I note the US has a surplus supply, additionally they get there energy from Canada.

"It's because of speculation about things that could hurt the supply in the future," he said. "These last couple of years, speculators have moved market prices for gas more than they have ever before."

Energy is intimately linked to food prices, so the increase in both of these groups is a double whammy to the developing nations.

Who benefits from high fuel prices?
(You might think it would be the oil producing nations alone, but, that is not the case)

The US benefits, not the consumer, but the government through the lower value on the dollar.
How?

The lower dollars allows them to deflate their debt. ( I mentioned that way back on November 10/2010)
A recent article reiterates that point: Why high oil prices could knock down the U.S. dollar

"On balance, higher oil prices are negative for the dollar," he said.

This is a win/win situation for the US, the largest debtor nation on the globe. If the US dollar falls by 10 percent, so does the value of their indebtedness. If it falls by 20 percent then the level of indebtedness falls in accordance. Making this very bad news for a nation like China, who has all this US money owed to them the value of it being decreased by stealth and having to pay much higher energy prices.

Another way this increase in oil prices aids the US is by ensuring countries world wide continue to hold and/or accrue the US dollar. Since it is still the petro-dollar.

Back to QE2 and nation destabilizing-

Following along, you should now understand that QE2 was designed to do exactly what it has done. Destabilize the economies that the US led NATO army wanted destabilized, wanted to remove and replace the leadership or attack as necessary......

We have to realize that the plans to attack these nations whether overtly, covertly or both emanated from the private US central bank and it's allies within the government. The flooding of the markets was the first salvo of the attack, no bombs necessary. Just create the hardship, have your handy dandy bought and paid for stooges in place, then direct the chaos from behind the scenes.
Taking action overtly if and when necessary. In Egypt, no overt attacking was necessary. The Egyptian military having been long co-opted and controlled thanks to US dollars.

In Libya, we have a bit of a different tale ongoing, but still the economic warfare increased the food prices which acted as a catalyst. Libya dropped the taxes on food to try to help the people cope, but that was not enough. The stooges were ready to go.
And now the NATO nations are coming in for the attack! Here is some of the latest news-

-The United States is moving two amphibious warships and 400 Marines to the region.
-Canada is beefing up its military presence in the region around Libya, dispatching a patrol ship and special forces to prepare for more muscular evacuations that could evolve into major aid lifts or even a blockade to hem in the Gadhafi regime.

Any guess on who the special forces are that Canada is sending in?
Why it is none other then JTF2!!!
Postmedia News has confirmed that JTF2, Canada's elite special forces unit, has been sent to the region. Canada's own special forces/ terrorism group.

With world leaders warning that Libya could face a protracted civil war, there were concerns that foreign military intervention could actually bolster the position of embattled Libyan leader Moammar Gadhafi.

This is the goal my friends, this is exactly the goal!
The west will ensure the balkanization of Libya into, IMO, minimally three smaller nations, possibly four. The people will fight amongst themselves. The west will control the oil rich areas through puppet government and Gadhaffi can stay, or not, they won't care.

As I said in the beginning, nothing happens in a vacuum. QE2 was designed to cause destabilization through speculative commodities bubbles enabling interested parties to profit every and any which way they can.

Regarding the tyranny of the private central banks, and their ability to foment misery and poverty.......I am going to end with a quote from Michael Hudson:

"This pretext for excluding government from meaningful regulation is that finance is so technical that only someone from the financial "industry" is capable of regulating it. To add insult to injury, the additional counter intuitive claim is made that a hallmark of democracy is to make the central bank "independent" of elected government. In reality, of course, that is just the opposite of democracy. Finance is the crux of the economic system. If it is not regulated democratically, in the public's interest then it is "free" to be captured by special interests. So this becomes the oligarchical definition of "market freedom"