Chikyu- 'Earth' in Japanese - Boring holes into the Earth's Mantle

Chikyu - (Japanese for Earth) is a Japanese Scientific Drilling Ship, built specifically for the Integrated Ocean Drilling Program, the ship is the Japanese part of the IODP program was called Chikyū Hakken- Japanese for "Earth Discovery".

The vessel is designed to drill 7 to 10 kms beneath the seabed where the Earth's crust is much thinner.
Here is the ship: 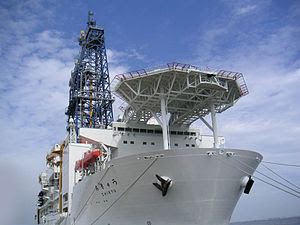 A bit more about Chikyu-

Behemoth is the only word that comes to mind as I discuss, with mouth agape, about the deep-sea drilling vessel Chikyu. JAMSTEC, the Japanese Agency for Marine-Earth Science and Technology, launched a venture in 2005 to take the deepest cores into the earth’s crust following the route of Nautilus in Jules Verne’s novel. The deepest core into the crust was currently 2111m but during the Center for Deep Earth Exploration (CDEX) the goal was 7000m. To accomplish this…the Japanese unleash Chikyu which translates into “earth”, a fitting name given the size of the ship. Yes it is really that big…it is hide-the-children-and-flee-for-the-country-side big. The vessel is 210m long (689ft), approximately 20 school buses in length. The gross tonnage on this monster is 57,500 tons, approximately the weight of 460 blue whales. I realize that vessels do get larger. The QE II has length of 963ft and gross tonnage of closer to 70,000 tons. However, as research vessels it is ginormous. Plus the QE II cannot drill 7000m into the earth’s crust in 4000m of water.

Chikyu can drill 700 meters into the earth's crust below 4000 meters of water.
Wow that is deep! Beyond my comprehension deep!
Here is a pic that may help us all understand

This week (December 2007) Chikyu completed a successful first expedition to one of the most active earthquake fault zones on the planet where 4 boreholes 1000′s of meters deep were drilled. . Ultimately, sensors will be installed in the boreholes to monitor physical stresses, movement, temperature and pressure. The Nankai Trough Seismogenic Zone Experiment (NanTroSEIZE) is the first geologic study of the underwater subduction zone faults that give rise to the massive earthquakes known as mega-thrust earthquakes. Scientists will presented their findings from the first expedition at the American Geophysical Union meeting this previous week n San Francisco

Care to guess what region on the planet were targeted by Chikyu? Where was this ship located? An extremely active seismic area.

The Chikyu was docked at Hachinohe, 250 kilometers north of Sendai, on 11 March when the rise‑and‑fall of water levels caused it to scrape bottom. That collision snapped off one of the six thrusters that maintain the ships position while drilling, a feature that makes it so valuable for deep-sea drilling. As a result, a 68-day research expedition to study the deep coal bed biosphere off Shimokita, Japan, has been canceled.Asahiko Taira, a vice president of the Japan Agency for Marine‑Earth Science and Technology, said that it will take 2 to 3 months to repair the vessel.

The first attempt took place in Spring 1961, and was known as Project Mohole.

So this has been ongoing.

More on the Chikyu here, so you can read to your hearts content.

But I will quote this-

Its mission is to drill into the tectonic plates and potentially into the earth's mantle. It is anticipated that research will play an important role in understanding the principles of tectonic movement and earthquake prediction

Drilling into tectonic plates? Potentially earth's mantle? An important role in understanding principles of tectonic movement? Just understanding? Just prediction? I have some doubts.
Thinking of course of the military agenda to control the weather. You know Weather as a Force Multiplier: Owning the weather in 2025

Keeping in mind that most research is done to advance militaristic or profiteering agenda's
Were sensors placed into the holes? I don't know. Who really knows? But if this presented an opportunity for militarization, realistically we would have to assume it would/could be developed with that in mind.

I don't know if this is related to the massive earthquake and tsunami in Japan, that brought the disaster that is Fukushima on.
It does however sound extremely destabilizing, in my opinion.
Perhaps earthquake inducing. I saw mention of tectonic plates in a number of articles.
The whole thing just makes me go. Hm!??
Posted by Penny at 12:09 PM