Another Mosque set ablaze by the Jewish "Extremists"

A follow up to yesterday's post!
You may wonder why I quote-end quote the word "extremist" regarding the followers of Judaism that perpetuate these kinds of attacks?
So I will explain, the attacks are not rare, they are the norm.
Therefore it is hard to think of this as the work of a few bad apples, when by all appearances these type of activities go on day in, day out. For sixty years now.

Vandals set fire to another mosque in the West Bank on Thursday and defaced it with Hebrew graffiti. The Hebrew words for "war" and "Mitzpe Yitzhar" were painted in red on a wall

This one was being used by worshippers! -
As reported by Ynet

"At 4 am, worshipers discovered part of the mosque was on fire and were luckily able to extinguish it quickly. The building sustained light damage, mostly to its carpets and chairs. No injuries were reported."

This picture is from the mosque torching posted on yesterday 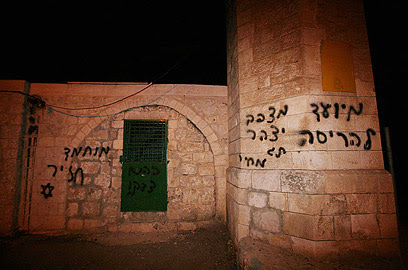 Some of the slogans read: "Price tag," "Kahane was right," "Muhammad is dead," and "marked for razing."

"Kahane was right"- Wow, talk about your fanatical extremist type
Posted by Penny at 8:23 AM