Where is the IAEA?
By the way if you are a bit concerned about this material coming through a town near you....
To bad for you!
The Canadian government feels no need to bother itself over the concerns of the peons.
Democracy? No way. Fascist Tyranny? Yup!
Let's read the news together...

Weapons-grade uranium is quietly being transported within Canada, and into the United States, in shipments the country's nuclear watchdog wants to keep cloaked in secrecy.

A confidential federal memo obtained through the Access to Information Act says at least one payload of spent, U.S.-origin highly enriched uranium fuel has already been moved stateside under a new Canada-U.S. deal

(at least one load of highly enriched uranium, could be more.)

The shipments stem from the highly publicized agreement signed last year by Prime Minister Stephen Harper and U.S. President Barack Obama, amid fears that nuclear-bomb-making material could fall into the hands of terrorists.

The above italicized part is nonsense, it is spin to justify what is really going on here. Canada is supplying the means to make more bombs to the US. Plain and Simple. The natural question that follows is where will these bombs be placed? In Canada?

But even as the radioactive freight travels toward the U.S. border, the Canadian Nuclear Safety Commission has no plans to hold public hearings or disclose which communities lie along the delivery route.

Why is that you ask?

When asked why public hearings aren't necessary for the uranium deliveries, a commission spokeswoman replied by email: they (Public Hearings )

"are not carried out given the robustness of the packages used and due to the security issues related to the transfers of highly enriched uranium." 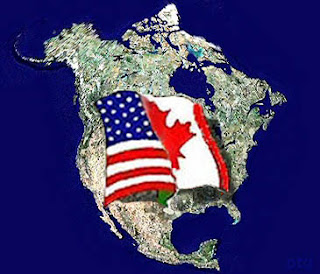 These covert shipments sure appear to be "illicit trafficking".
Is that why there is so much secrecy surrounding them?
Posted by Penny at 8:20 AM

Email ThisBlogThis!Share to TwitterShare to FacebookShare to Pinterest
Labels: Canada, US